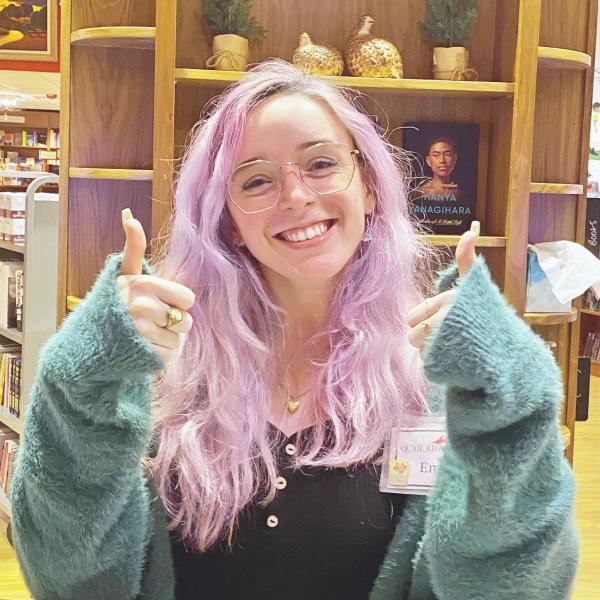 Emma is a North Carolina native who got her BFA in Creative Writing from UNCW and plans to get her master’s degree someday, hopefully before she dies. She is an avid reader and sometimes-writer and loves all things spooky and/or classic. Emma is best known for being the tallest QRB employee (with purple hair) and always talking about her fat cat. At any given time, she is reading four books at once and has at least seventeen books on standby.

Plain Bad Heroines by Emily M. Danforth (William Morrow) was by far my favorite book of 2021. It's spooky and sapphic and gothic to the extreme. The story switches between a haunted early 1900s boarding school and modern Hollywood with a rotating (and entirely queer) cast of characters. Read it read it read it!!!

Death of Jane Lawrence by Caitlin Starling (St. Martin’s) is equal parts a gothic love story, a how-to on ritual magic, and a haunting of the most confusing variety. I loved the remnants of old literature in the setting and the foreboding feeling that stuck with me even after I put the book down. If you're a fan of the macabre there isn't a better book to read.

Her Body and Other Parties: Stories by Carmen Maria Machado (Graywolf Press) is a blend of urban legends and horror stories all focusing on the roles women play in society. Machado writes in the most beautiful, haunting way, and each story is truly unique and almost always a little uncomfortable.

There's so much to say about Wuthering Heights by Emily Bronte (Penguin), most of which has already been said, but it really is the blueprint for gothic literature. It's a dark, layered romance, filled to the brim with unlikeable characters and gorgeous prose. You'll either love it or hate it, but either way, read it!

A History of Wild Places by Shea Ernshaw (Atria) has one of the best beginnings I've ever read. I was so immediately pulled into the mystery, the atmosphere, the setting. It's entirely original and gave me weird dreams for weeks afterwards.

Donna Tartt could write a how-to manual on dishwashing, and I'd still read it. The Secret History (Vintage) is dark academia embodied, and so incredibly immersive that I lived on those pages long after I read the last. Tartt's writing is beautiful, her characters hedonistic at best, and her literary worlds are unforgettable.

An Elderly Lady Must Not Be Crossed by Helene Tursten (Soho Crime) is simply the cutest book in the world with the most delightful protagonist by the name of Maud. Maud is an 89-year-old murderess with no remorse and an acerbic inner monologue that will have you anticipating and even endorsing her kills.

The Haunting of Hill House by Shirley Jackson (Penguin) is THE book to read if you want to feel like you're losing it bit by bit with every page you turn. Eleanor is a fantastically unreliable narrator and I loved how Hill House served as both the villain and the love interest.

Rebecca by Daphne Du Maurier (William Morrow) is my go-to rainy day book. Despite the ambiguity gothic novels thrive on, the characters in Rebecca were fully fleshed out and the haunted manor is beautifully described. It's slow moving at first, but once the tension builds, you'll have a hard time putting it down.

Mexican Gothic by Silvia Moreno-Garcia (Del Ray) is such a wonderful combination of traditional gothic themes and 1950s Mexican culture. It's scary and unpredictable and the last 50 or so pages left me scrambling for solid ground.

The award-winning author of The Miseducation of Cameron Post makes her adult debut with this highly imaginative and original horror-comedy centered around a cursed New England boarding school for girls—a wickedly whimsical celebration of the art of storytelling, sapphic love, and the rebellious female spirit.

The Death of Jane Lawrence: A Novel (Hardcover)

From the Bram Stoker-nominated author of The Luminous Dead comes a gothic fantasy horror—The Death of Jane Lawrence.

Her Body and Other Parties: Stories (Paperback)

Finalist for the National Book Award for Fiction

“[These stories] vibrate with originality, queerness, sensuality and the strange.”—Roxane Gay

“In these formally brilliant and emotionally charged tales, Machado gives literal shape to women’s memories and hunger and desire. I couldn’t put it down.”—Karen Russell

'May you not rest, as long as I am living. You said I killed you - haunt me, then' Lockwood, the new tenant of Thrushcross Grange on the bleak Yorkshire moors, is forced to seek shelter one night at Wuthering Heights, the home of his landlord.

A History of Wild Places: A Novel (Hardcover)

In this “riveting, atmospheric thriller that messes with your mind in the best way” (Laini Taylor, New York Times bestselling author), three residents of a secluded, seemingly peaceful commune investigate the disappearances of two outsiders.

Travis Wren has an unusual talent for locating missing people.

An Elderly Lady Must Not Be Crossed (Hardcover)

Don’t let her age fool you. Maud may be nearly ninety, but if you cross her, this elderly lady is more sinister than sweet.

The Haunting of Hill House (Paperback)

"Last Night I Dreamt I went to Manderley Again..."