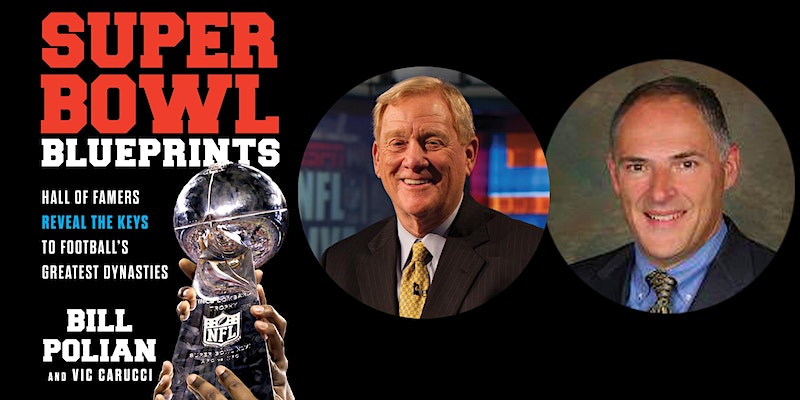 More than a half century has passed since the first Super Bowl was played in 1967. Over those decades, a small group of NFL franchises have dominated the sport, and in doing so, revolutionized the game of football. In Super Bowl Blueprints, Hall of Famer Bill Polian shares exclusive conversations with the executives, coaches, and players who describe how these dominant franchises achieved Super Bowl glory. Polian, the architect of the Super Bowl XLI champion Indianapolis Colts, provides a rare glimpse inside the executive suites, locker rooms, and sidelines for the key moments that define the modern NFL.  Super Bowl Blueprints reveals the secrets of success in the modern NFL, from those who know the game best.

Bill Polian is a six-time NFL Executive of the Year known for his tenures with the Buffalo Bills, Carolina Panthers, and Indianapolis Colts. He later became an ESPN analyst and was inducted into the Pro Football Hall of Fame in 2015. Polian is the author of The Game Plan: The Art of Building a Winning Football Team.

Vic Carucci is a reporter and columnist for The Buffalo News and a co-host on SiriusXM NFL Radio. He is the co-author of several bestselling books about football.

Book purchases include signed bookplates from the authors, while supplies last.

In Super Bowl Blueprints, Hall of Fame general manager Bill Polian and veteran football scribe Vic Carucci sit down with the architects of the greatest teams of all time, digging into how these dynastic squads did what they did, with more insight and access than any football book in history.