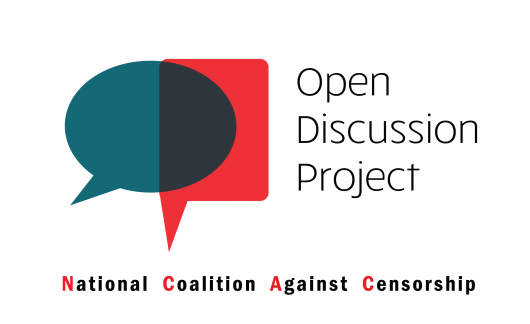 The Open Discussion Project's goal is to foster dialog and better understanding between people with different political viewpoints and to provide a space for civil discourse on controversial or divisive topics. The book selections are also chosen to represent issues and viewpoints across the political spectrum.  The aim of each discussion is to promote understanding rather than convince anyone of a particular point of view. We have two facilitators skilled at doing just that. New meeting day: The group meets the first Tuesday of the month at 7 pm.

Three organizations--the National Coalition Against Censorship, the National Institute for Civil Discourse, and the American Booksellers' Association--have joined together to sponsor the Open Discussion Project. The national roll-out has started with six bookstores, including QRB. The sponsoring organizations are offering their support by supplying trained facilitators, community outreach, and a forum for the participating stores to discuss best practices.

March 3: Ratf**ked: Why Your Vote Doesn’t Count by David Daly

April 7: The Faces of Poverty in North Carolina: Stories from Our Invisible Citizens By Gene R. Nichol

May 5: Listen, Liberal: Or, What Ever Happened to the Party of the People? (Paperback) By Thomas Frank

August 4: Arguing with Zombies: Politics and the Fight for a Better Future by Paul Krugman

September 1: American Secession: The Looming Threat of a National Breakup by F.H. Buckley

As with all of our in-store book clubs, participants receive a 21% discount on the discussion book; just let us know at the counter when you purchase it.

Shop our upcoming and past selections below.

The New York Times Bestseller, with a new afterword

The Faces of Poverty in North Carolina: Stories from Our Invisible Citizens (Hardcover)

These are the faces of poverty in North Carolina: scores of homeless men, women, and children take refuge in makeshift camps, barely hidden in the woods near some of our most affluent neighborhoods. Hundreds wait in lines hours long to receive basic health care at underfunded free clinics.

Listen, Liberal: Or, What Ever Happened to the Party of the People? (Paperback)

A SCATHING LOOK AT THE STANDARD-BEARERS OF LIBERAL POLITICS—A BOOK THAT ASKS: WHAT’S THE MATTER WITH DEMOCRATS?

Arguing with Zombies: Economics, Politics, and the Fight for a Better Future (Hardcover)

American Secession: The Looming Threat of a National Breakup (Hardcover)

Americans have never been more divided, and we're ripe for a breakup. The bitter partisan animosities, the legislative gridlock, the growing acceptance of violence in the name of political virtue--it all invites us to think that we'd be happier were we two different countries. In all the ways that matter, save for the naked force of law, we are already two nations.

“Few books are as well-matched to the moment of their publication as Ezra Klein’s Why We’re Polarized.” —Dan Hopkins, The Washington Post

“It is likely to become the political book of the year....Powerful [and] intelligent.