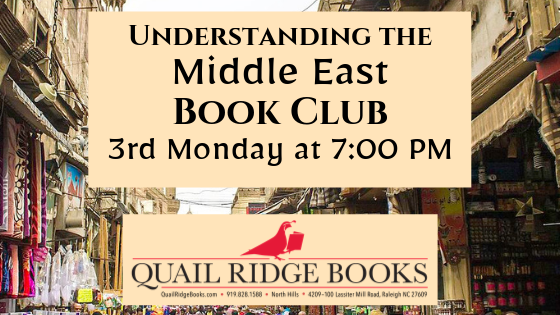 Understanding The Middle East group meets on the third Monday of  the month at 7 p.m.  It has the purpose of exploring the rich culture of the Middle East through literature (poetry, fiction, memoirs). They do include readings of nonfiction as they try to gain an understanding of history and current events.  Although they read writers from the west, the goal is to discover the many talented authors from middle eastern countries who may not be well known in the U.S.  Even though discussions of politics cannot always be avoided, this is not the focus.

We do not meet in December.

April 20th.  Midnight at the Pera Palace: The Birth of Modern Istanbul by Charles King.

June 15th Lawrence in Arabia: War, Deceit, Imperial Folly and the Making of the Modern Middle East by Scott Anderson (Part One of Discussion)

Midnight at the Pera Palace: The Birth of Modern Istanbul (Paperback)

Lawrence in Arabia: War, Deceit, Imperial Folly and the Making of the Modern Middle East (Paperback)

One of the Best Books of the Year:
The Christian Science Monitor
NPR
The Seattle Times
St. Louis Post-Dispatch
Chicago Tribune

Finalist for the National Book Critics Circle Award in Biography