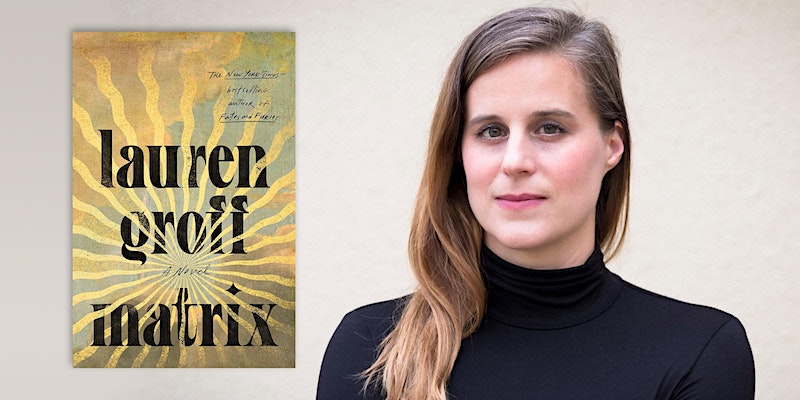 Join us for an outdoor meet & greet with Lauren from 6-6:45 p.m. or virtually for a conversation with Cate Lineberry at 7 p.m.

Cast out of the royal court by Eleanor of Aquitaine, deemed too coarse and rough-hewn for marriage or courtly life, seventeen-year-old Marie de France is sent to England to be the new prioress of an impoverished abbey, its nuns on the brink of starvation and beset by disease. At first taken aback by the severity of her new life, Marie finds focus and love in collective life with her singular and mercurial sisters. In this crucible, Marie steadily supplants her desire for family, for her homeland, for the passions of her youth with something new to her: devotion to her sisters, and a conviction in her own divine visions. Marie, born the last in a long line of women warriors and crusaders, is determined to chart a bold new course for the women she now leads and protects. But in a world that is shifting and corroding in frightening ways, one that can never reconcile itself with her existence, will the sheer force of Marie's vision be bulwark enough?

"Transcendent prose and vividly described settings bring to life historic events, from the Crusades to the papal interdict of 1208. Groff has outdone herself with an accomplishment as radiant as Marie's visions."  —Publishers Weekly, STARRED review

Lauren Groff is a two-time National Book Award finalist and the New York Times bestselling author of the novels The Monsters of Templeton, Arcadia, and Fates and Furies, and the short story collections Delicate Edible Birds and Florida. She has won the Story Prize and has been a finalist for the National Book Critics Circle Award. Groff's work regularly appears in The New Yorker, The Atlantic, and else­where, and she was named one of Granta's 2017 Best Young American Novelists.

LONGLISTED FOR THE 2021 NATIONAL BOOK AWARD FOR FICTION

“A relentless exhibition of Groff’s freakish talent. In just over 250 pages, she gives us a character study to rival Hilary Mantel’s Thomas Cromwell .” – USA Today