Mason Deaver | The Feeling of Falling in Love (online) 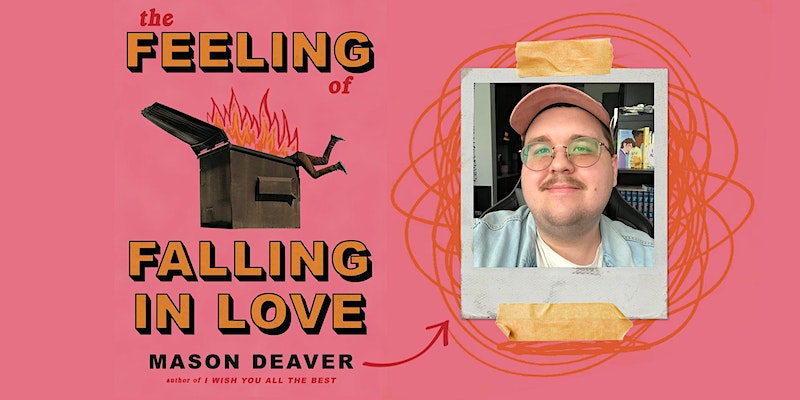 in conversation with Camryn Garrett (Off the Record)

From the bestselling author of I Wish You All the Best, comes a new kind of love story, about the bad decisions we sometimes make... and the people who help get us back on the right path.

Perfect for fans of Red, White, and Royal Blue by Casey McQuiston and What If It's Us by Adam Silvera and Becky Albertalli.

Born and raised in a small town in North Carolina, Mason Deaver is an award-nominated, bestselling author and designer. Their debut novel, I Wish You All the Best, was named a Junior Library Guild Selection and an NPR Concierge Book. Besides writing, they're an active fan of horror movies and video games.

Camryn Garrett grew up in New York and began her writing career at thirteen, when she was selected as a TIME for Kids reporter, interviewing celebrities like Warren Buffett and Kristen Bell. Since then, her writing has appeared on MTV and in HuffPost and Rookie magazine, and she was recently selected as one of Teen Vogue’s “21 Under 21: Girls Who Are Changing the World.” When she’s not writing, she studies film at NYU, and she’s a proud advocate for diverse stories and storytellers in any medium. Her first two novels, Full Disclosure and Off the Record, received rave reviews from outlets such as EW, Glamour, and SLJ, which said, in its starred review, “Readers will fall in love.” Friday I'm in Love is her third novel and first rom-com releasing on January 10, 2023!

Can't attend Live but want a signed copy? Order below. Please include personalization requests in the notes field during checkout (requests must be received by Friday, Aug. 12).

The Feeling of Falling in Love (Hardcover)

From the bestselling author of I Wish You All the Best, comes a new kind of love story, about the bad decisions we sometimes make...

It's too late for a Sweet Sixteen, but what if Mahalia had a coming-out party? A love letter to romantic comedies, sweet sixteen blowouts, Black joy, and queer pride.

She wants a big Sweet Sixteen like her best friend, Naomi.
She wants the super-cute new girl Siobhan to like her back.

Off the Record (Paperback)

The behind-the-scenes access of Almost Famous meets the searing revelations of metoo in this story of a teen journalist who uncovers the scandal of the decade.