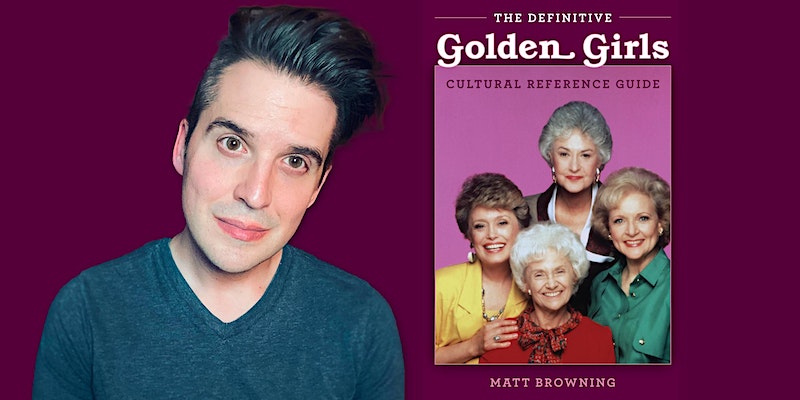 The Definitive Golden Girls Cultural Reference Guide is an encyclopedia of thousands of pop culture references from the perennial favorite TV series The Golden Girls. Researched episode by episode, the book finally explains those dated references to people, politics and events from the 1980s that made up so much of the show’s humor. In 1998, author Matt Browning launched EmptyNestTV.com, a website devoted to the Golden Girls spinoff series Empty Nest, which has led to multiple articles and interviews with the show’s cast and crew. Matt’s other works include Bookstore Explorer: West Virginia, a celebration of the state’s indie bookstore culture, and Chicks and the City, a children’s picture book about urban farming. He lives in Charleston, West Virginia.

He will be in conversation with David Mathews, who started the Facebook campaign that led to Betty White hosting Saturday Night Live in 2010. A Golden Girls fan since a childhood trip to Florida, where he saw a replica of their home at then-MGM studios, he developed a near-encyclopedic knowledge of the show by his early 20s. He loves all four lead actresses, but especially the late Bea Arthur, and, of course, Betty White. Along with countless interviews and charity events, David and his husband recently attended the first-ever Golden-Con in Chicago, Illinois, where David regaled the audience with his experiences with Betty through the SNL campaign and after.

Can't attend Live but want a personalized copy? Order below. Please include personalization requests in the notes field during checkout (requests but be received by Tuesday, June 21).

The Definitive Golden Girls Cultural Reference Guide is an in-depth look at the hundreds of topical references to people, places, and events that make up many of the funniest lines from the ever-popular television series, The Golden Girls.