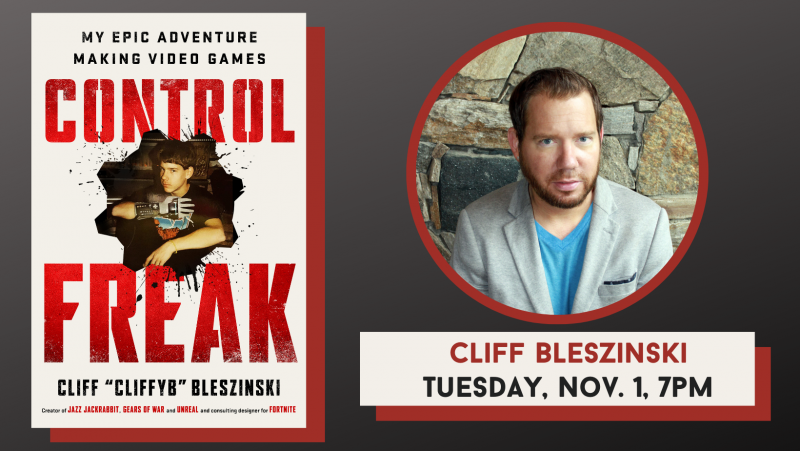 Control Freak pops the hood on the gaming industry and shines a light inside.

In 2021, the global games market generated over $180 billion in revenue—bigger than movies and music combined—and is projected to hit over $200 billion in 2022. Yet despite being a global economic juggernaut and having massive cultural impact, there hasn't been a definitive insider account about the industry. Until now. Enter legendary videogame designer Cliff “CliffyB” Bleszinski and his rollicking, colorful memoir Control Freak.

A twenty-five-year veteran of the industry, Cliff shipped his first commercial title, Jazz Jackrabbit, before graduating high school. During his long tenure at Epic Games, he became design director and was a key visionary behind the bestselling franchises Unreal and Gears of War and lent his expertise to the global obsession Fortnite.
As Cliff writes, “no one is weirder than a nerd with money.” In Control Freak, we follow his life from the 80s as a shy, awkward acne-riddled teen bullied by classmates and coping with the sudden loss of his father to a flamboyant personality in the gamer world who flourishes and connects with his flock of fellow nerds. His career takes off with massive hits and catapults him to a life as a hot rod-driving celebrity rubbing shoulders with Bill Gates and appearing on The Tonight Show with Jimmy Fallon.

Cliff will be in conversation with Amy Power.

The designer of Unreal and Gears of War offers an eye-opening personal account of the video game industry as it grew from niche hobby to hundred-billion-dollar enterprise.

Video games are dominating the planet. In 2020, they brought in $180 billion dollars globally—nearly $34 billion in the United States alone.