Audience-ology: How Moviegoers Shape the Films We Love (Hardcover) 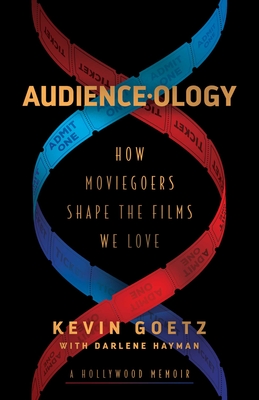 Discover the fascinating and secretive process of audience testing of Hollywood movies through these first-hand stories from famous filmmakers, studio heads, and stars.

Audience-ology takes you to one of the most unknown places in Hollywood—a place where famous directors are reduced to tears and multi-millionaire actors to fits of rage. A place where dreams are made and fortunes are lost. This book is the chronicle of how real people have written and rewritten America’s cinematic masterpieces by showing up, watching a rough cut of a new film, and giving their unfettered opinions so that directors and studios can salvage their blunders, or better yet, turn their movies into all-time classics.

Each chapter informs an aspect or two of the test-screening process and then, through behind-the-scenes stories, illustrates how that particular aspect was carried out. Nicknamed “the doctor of audience-ology,” Kevin Goetz shares how he helped filmmakers and movie execs confront the misses and how he recommended ways to fix the blockbusters, as well as first-hand accounts from Ron Howard, Cameron Crowe, Ed Zwick, Renny Harlin, Jason Blum, and other Hollywood luminaries who brought you such films as La La Land, Chicago, Titanic, Wedding Crashers, Jaws, and Forrest Gump.

Audience-ology explores one of the most important (and most underrated) steps in the filmmaking process with enough humor, drama, and surprise to entertain those with only a spectator’s interest in film, offering us a new look at movie history.

Kevin Goetz has been at the center of what Hollywood calls the movie research industry for more than thirty years. His firm, Screen Engine/ASI, conducts research for a majority of all movies that are widely released in America and around the world. With decades of experience, Goetz has worked alongside all of the major film studio chiefs, network and streaming platform executives, and production company decision-makers. The Los Angeles Times Magazine counted him as one of the 100 most powerful and influential people in Southern California. He has also produced twelve movies and brings both a marketing and filmmaking perspective to the interpretation of his research findings. He is a member of The Academy of Motion Picture Arts and Sciences and several other distinguished organizations: Producers Guild of America, Academy of Television Arts and Sciences, SAG/AFTRA, Actors’ Equity Association, the Qualitative Research Consultants Association, and the American Marketing Association. He currently sits on the boards of five charitable organizations as part of his philanthropic endeavors. Goetz resides in Beverly Hills with his husband, Neil, and their labradoodle, Kasha.

Darlene Hayman is a well-respected market research analyst specializing in the motion picture category. She is an expert in evaluating test audience data and uncovering insights to help filmmakers and studios understand moviegoers’ reactions to their films. She has earned a reputation for distilling the research into succinct conclusions that can be used to refine movies during final stages of postproduction. Darlene has collaborated with Kevin Goetz for the past fifteen years and joins him as coauthor of Audience-ology: How Moviegoers Shape the Films We Love. She continues her work with Mr. Goetz’s company, Screen Engine/ASI. Her research experience follows a two-decades career in the ad agency business. Born and raised in New Jersey, Darlene has spent her entire adult life in the Los Angeles area where she currently resides with her husband, Steve.

"Kevin’s analysis of my movies has been invaluable over the years. With a comedy, the number one objective is to find out, is it funny, and how do we make it funnier. Kevin is the best in the business.”—Sacha Baron Cohen, actor, writer, and producer

“It takes about two years for my brother Bobby and I to make a movie—from writing it, casting it, shooting it, editing it—then one day you have to show it to the world and find out whether you just wasted two years of your life. Kevin is always at that nerve-wracking first screening—front and center—and thank God he is, because he’s like a movie whisperer who somehow knows all the right questions to ask the audience, so by the end of the night we know what’s working, and we know what’s not, and, most importantly, we know how to make the movie better. That’s Kevin’s job in a nutshell—to make movies better. And he does.”—Peter Farrelly, director, writer, producer, and Academy Award winner

“Test screening a film is a terrifying experience but having Kevin in the room makes me break out in hives a lot less. The audience insight he has provided for our films has been vital, and it’s truly a sight to behold watching him work his magic. His ability to connect with and get inside the minds of an audience is unmatched.”—Charlize Theron, Academy Award winning actress and producer

“On almost every comedy I have worked on in the last 20 years, Kevin has taken the movie through the testing process. Watching a focus group of your movies is like being in a bathroom stall at high school and hearing kids talk about you. Having Kevin there is always reassuring because he always is championing the filmmakers. His ability to analyze and interpret audiences is coupled with a real sense of how story works. He’s at once a scientist interpreting data and a psychologist shepherding audiences to reveal the answers a filmmaker is looking for. He is THE guy when it comes to focus groups and audience testing. And his results are undeniable.” —Ben Stiller, actor, writer, and producer.


“The film media loves to gossip about who has “final cut” on a movie, but professionals know that what some contract says doesn’t matter much because in reality, the audience has final cut if you want a commercial hit. But getting an unbiased understanding of what the audience really thinks is not simple. Kevin Goetz is a master in aiding in this effort, as this book so entertainingly reveals.” —Tom Rothman, Chairman, Sony Pictures Entertainment Motion Picture Group

“So much of what we do as filmmakers revolves around providing maximum impact and wish fulfillment for our target audience. From concept to completion, we are constantly making assumptions around what we think will give the viewer a positive and unforgettable experience. Kevin and his remarkable company serve as the last validator of those assumptions. Through his carefully crafted process of audience engagement, focus groups, and data mining, he has consistently been able to help find the line between what was intended and what actually worked. This critical work has, hands-down, been the determining factor in the success of my films. There is no version of me locking picture without first consulting Kevin and his company Screen Engine/ASI.“ —Nate Parker, actor, director, writer, and producer

“I remember it like it was yesterday – the day of our first preview. Bohemian Rhapsody took me nearly 10 years to make. To say I was a ball of nerves is an understatement. When the lights came on, all I remember was seeing Kevin’s heartwarming smile from ear to ear. He leaned over and said, ‘You’ve got a massive hit on your hands,’ and all my nerves disappeared. To watch him work and know that the film you put your blood, sweat, and tears into is in the best of hands, is one of the greatest experiences. Kevin is truly the best in the business.” – Graham King, Academy Award winning producer

“When I screen my movies, they are bad. Then Kevin asks the audience why they are bad. It is painful. Like re-breaking a leg so it heals right. Then somehow, with his help, we figure out what to do. Now that I think about it, he doesn’t get paid enough. But this book should make up the difference.” – Judd Apatow, director, writer, and producer

“Whether you sit behind the camera or in front of it, in film school or in an office on a studio lot, or just face a screen as a movie lover, Audience-ology sheds light on how moviegoer feedback holds a special place in the final stages of filmmaking. The explanation of how the test screening process works is illustrated with fascinating stories that are the lore of Hollywood. I only wish this book had existed when I first started out in the business.”  – Amy Pascal, producer and former Chairman of Sony Pictures Entertainment Motion Picture Group