As the 19th century begins, the new American republic struggles to reconcile its lofty principles with the practical realities of a rapidly expanding nation. Three fairy rangers who helped the country win its independence—Goran the Sylph, Har the Dwarf, and Dela the Water Maiden—now find they must seek new alliances with the likes of Davy Crockett, Ichabod Crane, and the Cherokee hero Junaluska to combat a monstrous new conspiracy against peace, justice, and freedom on the frontier. 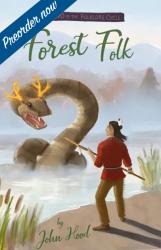