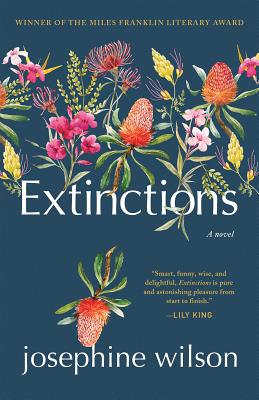 By Josephine Wilson
$15.95
On our shelves now

Funny, poignant, and galvanizing by turns, Josephine Wilson’s award-winning novel explores many kinds of extinction—natural, racial, national, and personal—and what we might do to prevent them.

Professor Frederick Lothian, retired engineer, has quarantined himself in a place he hates: a retirement village. His headstrong wife Martha, adored by all, is dead. His adopted daughter Caroline has cut ties, and his son Callum is lost to him in his own way. And though Frederick knows, logically, that a structural engineer can devise a bridge for any situation, somehow his own troubled family—fractured by years of secrets and lies—is always just out of his reach.

When a series of unfortunate incidents brings him and his spirited next-door neighbor Jan together, Frederick gets a chance to build something new in the life he has left. At the age of 69, he has to confront his most complex emotional relationships and the haunting questions he’s avoided all his life. Unbeknownst to him, Caroline—on her own journey of cultural reckoning—is doing the same. As father and daughter fight in their own ways to save what’s lost, they might finally find a way toward each other.

A masterful portrait of a man caught by history, and a sweeping meditation on the meaning of family, love, survival, and identity, Extinctions asks an urgent question: can we find the courage to change?

Josephine Wilson is a Perth-based writer. Her writing career began in the area of performance. Her early works included The Geography of Haunted Places, with Erin Hefferon, and Customs. Her first novel was Cusp, (UWA Publishing, 2005). Josephine has lectured and taught in the tertiary sector. She is the busy parent of two children and works as a sessional staff member at Curtin University, where she teaches in the Humanities Honours Program, in Creative Writing and in Art and Design history. She completed her Masters of Philosophy at Queensland University and her PhD at UWA. Extinctions (UWA Publishing, 2016) was the winner of the inaugural Dorothy Hewett Prize and won the 2017 Miles Franklin Award.

Witty and heartfelt, this is an unsentimental look at aging and the reckonings it brings.
— People Magazine

We live in an age of Extinctions—not only the plants and animals that give our planet its rich and life-sustaining biodiversity, but the potential extinction of democracy, of humanity, and life as we know it on the planet. Josephine Wilson knows this. She writes with great intention, calling upon us as individuals and as a society to change.

Extinctions is a moving portrait of one family's secrets, missed opportunities, and hopes for another chance at life. Beautifully written, with strong, memorable characters, Wilson's latest takes readers on a deeply satisfying journey and reminds us of our power to create change.

Gorgeously put-together . . . The various sad backstory details about old deaths, betrayals, and other wounds are teased out slowly and patiently, but that momentum is no greater than the more uplifting one: the unforeseen, truly magical opening of possibilities for growth, change, reconciliation, happiness. A really fine, deeply intelligent book with so much to think about and so much unexpected hope.
— Kirkus (Starred Review)

Wilson’s American debut artfully portrays the nuances of death and extinction . . . This contemplative novel skillfully delves into Frederick and Caroline’s psyches, resulting in a potent depiction of loneliness and contact.
— Publishers Weekly

Josephine Wilson’s novel, Extinctions, is whip-smart, full of unexpected moves and a wonderful cast of characters. From its first sentence, the prose exhibits an unselfconscious beauty, while the voice remains both compassionate and uncompromising.  A powerful, memorable read.

— Karen Joy Fowler, author of WE ARE ALL COMPLETELY BESIDE OURSELVES

Smart, funny, wise, and delightful, Extinctions is pure and astonishing pleasure from start to finish. I loved this novel.

A novel as beautifully and intricately designed as the iconic structures retired Australian engineer, Fred Lothian, admires. An intellectual but deeply flawed man, he can't see he may be preserving the artifacts of his family's past while letting his family wither away. A masterful meditation on love, loss and the carelessness of extinction.
— Helen Simonson, author of MAJOR PETTIGREW'S LAST STAND

Compassionate and unapologetically intelligent . . . A meditation on survival: on what people carry, on how they cope, and on why they might, after so much putting their head in the sand, come to the decision to engage, and even change.
— Miles Franklin Award Committee

[Extinctions] has already made a significant mark on the literary landscape.