Emilio Sanchez Revisited: A Centenary Celebration of the Artist's Life and Work (Hardcover) 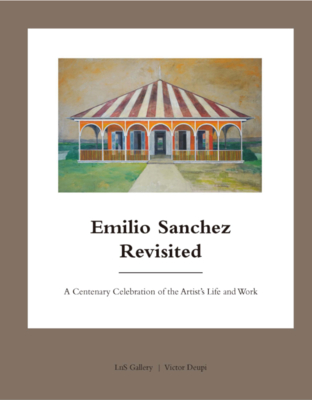 - A selection of visually unique paintings, watercolors, drawings, and etchings by the 20th-century Cuban American artist Emilio Sanchez - A cabinet of wonders that include letters, photographs and ephemera associated with the life and work of Sanchez - A collection of works by friends and contemporaries of the artist from both Cuba and North America - A celebration of the US Postal Service's selection of Sanchez as part of their "Forever Series" of stamps - Includes provocative essays that challenge our understanding of Sanchez's role within 20th-century Cuban, and Latin American modern art Emilio Sanchez Fonts (1921-1999) was a Cuban American artist known for his architectural paintings, drawings, and graphic prints of New York, Latin America, and the Caribbean. As a realist artist, he was attracted to folklore and the vernacular, with architectural scenes of everyday life taking preference over the great historical narratives of western civilization. His keen eye and remarkable ability to edit incidental elements also made him a painter of dreamlike architectural enigmas, as if the buildings he depicted existed only in memory. Sanchez's work is in the permanent collections of many institutions, including the Metropolitan Museum of Art (New York), the Boston Museum of Fine Arts, the Brooklyn Museum of Art, the Hirshhorn Museum and Sculpture Garden (Washington DC), the Museo Nacional de Bellas Artes de La Habana (Havana), the Museo de Arte Moderno (Bogot ), and the Philadelphia Museum of Art. He received First Prize at the 1974 San Juan Biennial in, Puerto Rico, and was awarded the CINTAS Fellowship in the Visual Arts (1989-90). His remarkable story, like that of his tragic country, is a tale of powerful contrasts, intense light, and mysteriously penetrating shadows.