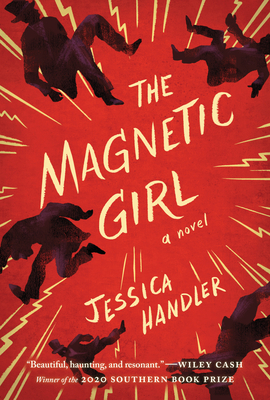 Winner of the 2020 Southern Book Prize
Indie Next Pick, April 2019
One of the Atlanta Journal Constitution's South's 10 best books of 2019
Finalist for the Townsend Prize Books All Georgians Should Read from the Georgia Center for the Book
One of the Wall Street Journal's Spring Picks for books
Okra Pick from the Southern Independent Booksellers Alliance

In this gorgeously envisioned debut, set as the emergence of electricity and women's desire for political, cultural, and sexual power electrified the country, a young woman's rise to Vaudeville fame exposes secrets of her family's past--and the keys to her own future.

In rural north Georgia two decades after the Civil War, thirteen-year-old Lulu Hurst discovers an obscure book by legendary Mesmerist Henrietta Wolf on her father's shelf. After Lulu uses Wolf's wisdom to convince a cousin she can conduct electricity with her touch, her father sees an opportunity.

Her father's lessons transform Lulu, once deemed gangly and indelicate, into an electrifying new woman: The Magnetic Girl, captivating enthusiastic crowds by lifting grown men in parlor chairs, throwing them across the stage with her "electrical charge." As her notoriety grows, Lulu harbors a secret belief that she can use the power of Mesmerism to heal her disabled baby brother, Leo, with whom she shares a profound and supernatural mental connection. To help him, she delves into the mysterious book's pages, determined to harness Wolf's teachings and convince herself, and the world, that her gifts are authentic. But will they be enough to heal her family?

Based on true events, this award-winning novel is a unique portrait of a forgotten period in history, seen through the story of one young woman's power over her family, her community, and ultimately, herself.

Jessica Handler is the author of Braving the Fire: A Guide to Writing About Grief and Invisible Sisters: A Memoir, which was named one of the "Twenty Five Books All Georgians Should Read" and Atlanta magazine's "Best Memoir of 2009." Jessica writes essays and nonfiction features that have appeared on NPR, in Tin House, Drunken Boat, Full Grown People, Brevity, Newsweek, The Washington Post, and More Magazine.