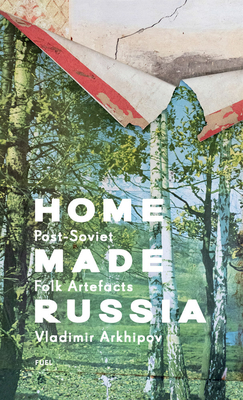 Back in print: Fuel's highly popular collection of improvised implements and homespun tools from Soviet Russia

Featuring a redesigned cover, Home Made Russia compiles over 220 artefacts of Soviet culture, each accompanied by a photograph of the creator, their story of how the object came about, its function and the materials used to create it.
The Vladimir Arkhipov collection includes hundreds of objects created with often idiosyncratic functional qualities, made for use both inside and outside the home, such as a tiny bathtub plug carefully fashioned from a boot heel; a back massager made from an old wooden abacus; a road sign used as a street cleaner's shovel; and a doormat made from beer bottle tops.
Home Made Russia presents a unique picture of a critical period of transition, as the Soviet regime crumbled but was yet to be replaced with a new system. Each of these objects is a window, not only into the life of its creator, but also the situation of the country at this time. Shortages in stores were commonplace, while wages might be paid in goods, or simply not paid at all. These exceptional circumstances lent themselves to a singular type of ingenuity, respectfully documented in intimate detail by Vladimir Arkhipov.