The Templar Quest to North America: A Photo Journal (Paperback) 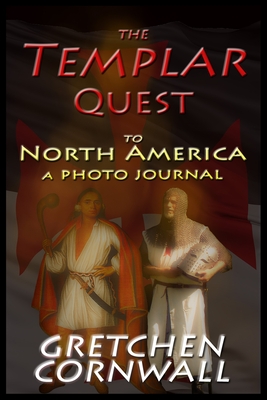 A Templar Cross Patt e was discovered in a forest in Wisconsin. The Mohican Reservation now holds the remains of a lost Knight Templar settlement. Controversial? Yes The mystery of the forest holds a Templar Tomb, effigy and the foundation stones of a castle Columbus could have only known of North America due to his predecessors, the Vikings and their descendants, the Knights Templar.

I believe that the anomalies of history are worth investigating. Rather than sweeping them under a carpet to preserve the status quo, oddities should be regarded as mounting evidence for a historical course correction, an opportunity to deepen our understanding of who we are and our origins.

It is far too simplistic to walk past an object, architectural feature or an odd local legend as being circumstantial. Dig just below the surface, and narrow, dull threads turn into golden ropes of probabilities...

I have long been a proponent of Templar missions to North America. I was approached in July of 2018 with a photograph of a rock carving that had every earmark of being medieval Templar graffiti. I knew I had to jump in with both feet and find out all that was possible about his mysterious discovery. The photo had been taken deep within a Wisconsin forest

In the summer of 2018, I was sent photos that would lead me to the now Tribal lands of the Mohicans where a great secret had been waiting for hundreds of years.

The initial photo was of a Templar Cross Patt e via Facebook Messenger. I nearly fell out of my chair. It was credible and the individual who sent them had such an integrous background as to be the stuff of movies Wayne Murphy, a retired police officer and Tribal Elder of the Mohicans, was not given to flights of fancy.

I had to visit the location myself and meet the man who found the carving to verify the discovery but found so much more, exceeding my expectations of the site. I determined that I may have been standing on the grounds of a lost Templar settlement near Lake Michigan, deep in the woods on the Mohican Reservation. I was given permission to photography & explore the Reservation as long as I was accompanied by Tribal Elder, Wayne Murphy.

The growing realization of what had been achieved in such a dangerous voyage and inland exploration by Templars could only mean that they had Native American allies.

The site was not just a random carving but the beginnings of what I believed could be an actual Templar relay fortress for the purpose of a westward push and a sustained return. It is a link in a chain from Oak Island Nova Scotia. I had the privilege of being in the War Room of the Curse of Oak Island, virtually, in Season Six, Episode Six 2018

The dramatic history of the Templars rise and fall has become familiar. The infamous date of October 13th, 1307. A day that shocked Europe and gave us the folklore of bad luck down the centuries, known as Friday the 13th. Did they survive? Where did they go? What were their hopes and dreams for the future? I believe the investigation held within the pages of this book answers many of these questions.

They were arrested en masse in 1307 and imprisoned for several further years. They lost their Grand Master and two of his senior officers in a horrific execution in 1314, ending the public face of the tough, skilful and most mysterious Chivalrous Order in Europe.

The courage of Jacques de Molay at his execution by fire had to leave an indelible mark on the minds of those who survived. This investigation is one avenue of inquiry as to what happened to the survivors.