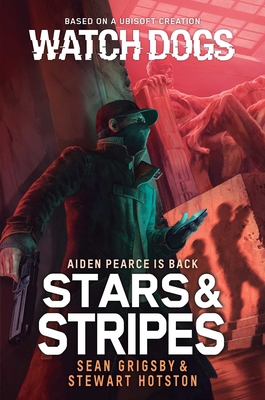 Infamous hacker Aiden Pearce, main protagonist of the Watch Dogs® games, follows a bloody trail of corruption to the highest levels of government in this gritty action adventure from the bestselling videogame

Older, but not necessarily wiser, Aiden Pearce, “the Fox”, is a rolling stone, surviving by moving from one shadowy hacker job to the next. While in Baltimore, he’s captured by a mysterious agent who insists finding missing cargo full of transhuman tech is something only Pearce can do. When flattery doesn’t work, he’s blackmailed into taking the job. Worse, he’s partnered again with the unscrupulous Jordi Chin. Soon what looks like a simple investigation spirals into a nefarious plot leading all the way to the White House. Yet why should Aiden help a country that only wants him behind bars? For the Vigilante, no one escapes hard justice – not even Uncle Sam.

SEAN GRIGSBY is a professional firefighter in central Arkansas, where he writes about lasers, aliens, and guitar battles with the Devil when he’s not fighting dragons. He hosts the Cosmic Dragon podcast.

STEWART HOTSTON lives in Reading, UK. After completing a PhD in theoretical physics, Stewart now spends his days working in high finance. He has had numerous short stories published as well as three novels, including the political thriller Tangle’s Game. When not writing or working, Stewart is a senior instructor at the School of the Sword and Team GB member in the HEMA categories of Rapier and Rapier & Dagger.

"A huge treat for the video game fans as we read Aiden Pearce control cranes, vehicles, and all sorts of electronics in quick-witted fashion during shootouts with shotgun-arms against bulletproof chest augmentations and rpm-revving car chases to gain the upper hand in a show of cinematic and stunning action sequences on a grand scale. By the end, you’ll wish for a big budget movie to incorporate these scenes."
— Best Thriller Books

"This is a book that Watch Dogs fans will really want to check out, as well as those who enjoy a good action-oriented story."
— Game Industry News

"I honestly could not put this one down.The action perfectly merged the high-tech setting of the Watch Dog universe. This is a high-octane ride that does not let up."
— What You Tolkien About