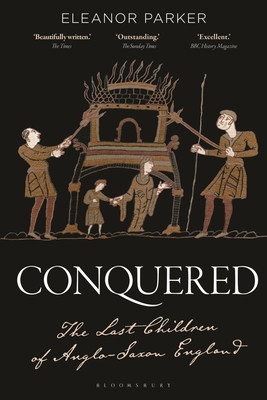 The Norman Conquest is one of the most momentous events in English history and its consequences changed England forever. Indeed, the Battle of Hastings and its aftermath nearly wiped out the leading families of Anglo-Saxon England - so what happened to the children this conflict left behind?

Conquered offers a fresh take on the Norman Conquest by exploring the lives of those children, who found themselves uprooted by the dramatic events of 1066. Among them were the children of Harold Godwineson and his brothers, survivors of a family shattered by violence who were led by their courageous grandmother Gytha to start again elsewhere. Then there were the last remaining heirs of the Anglo-Saxon royal line - Edgar theling, Margaret, and Christina - who sought refuge in Scotland, where Margaret became a beloved queen and saint. Other survivors, such as Waltheof of Northumbria and Fenland hero Hereward, became legendary for rebelling against the Norman conquerors. And then there were some, like Eadmer of Canterbury, who chose to influence history by recording their own memories of the pre-conquest world. From sagas and saints' lives to chronicles and romances, Parker draws on a wide range of medieval sources to tell the stories of these young men and women and highlight the role they played in developing a new Anglo-Norman society. These tales - some reinterpreted and retold over the centuries, others carelessly forgotten over time - are ones of endurance, adaptation and vulnerability, and they all reveal a generation of young people who bravely navigated a changing world and shaped the country England was to become.