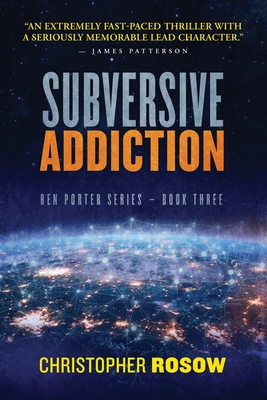 FBI Special Agent Ben Porter creates a formidable, off-the-books team tasked to hunt down and capture America's most-wanted terror suspect. Venturing far beyond the borders of the United States in search of his target, Ben uncovers clues that lead him not only toward his prey, but also deep inside an insidious, international plot-one that targets every person who is connected on-line . . . including you.

"All right, you probably missed out on the GameStop frenzy but don't miss Subversive Addiction. This is an extremely fast-paced thriller with a seriously memorable lead character, FBI Special Agent Ben Porter. Christopher Rosow is the real deal."

"Strap in for another Rosow ride around hairpin curves at breakneck speed. Like False Assurances and Threat Bias, this fast-moving gem sucks you in early and never lets you go."

False Assurances, optioned for a feature film by Spyglass Media Group, is ". . . a gripping suspense thriller with fast-paced storytelling and dynamic characters . . . Ben Porter is a whole new brand of 'hero' that will take audiences on a captivating ride."