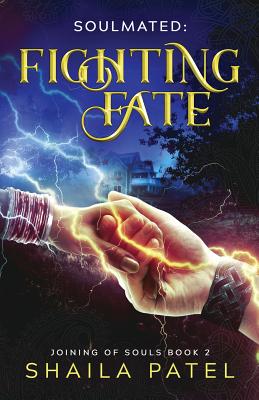 This is book number 2 in the Joining of Souls series.

For fans of Jennifer Armentrout or Melissa Landers. The exciting sequel to Soulmated, Book 1 in the Joining of Souls Series. Fighting Fate is an #ownvoices young adult interracial romance between an Indian American heroine and an Irish empath hero.

Empath Liam Whelan is determined to protect Laxshmi "Lucky" Kapadia, the girl he loves, at all costs--even if it means breaking her heart to keep her alive. Stopping the joining cold means Liam's life is in danger from the Soul Seekers and the ruthless Minister Gagliardi who now has designs on Lucky. Liam has no choice but to find the strength to fight his desires, fight the joining, and fight fate.

After the unthinkable happened, Lucky's "hallucinations" have been working double-time. Heartbroken and plagued by doubts, she meets a man who gives her a mind-blowing explanation for her predicament. Her apparent savior provides her with an escape from her hell: run away with him or return to her drab existence and watch Liam move on with her heart in his hands. All Lucky ever craved was to be in control of her own fate, but when her only choices fight against her heart, can she find the strength to battle for what she wants?