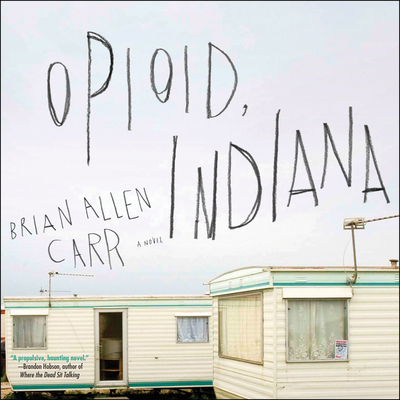 Short, sweet and stunning, OPIOID, INDIANA tracks Riggle, living in a city he’ll call Opioid so as not to embarrass his real town, as he tries to save those he loves while simply raising the rent before horrible things happen. The story is intercut with lovely recollections of his long-gone mother’s personal mythologies as she related them to him in the darkest hours. I thought that idea sounded ridiculous as I first paged through the book – by the middle, I was in LOVE with it. Even the darkest characters here shine some light, have some beauty; the brightest flare like tiny suns. I consider this mere steps away from being a Young Adult title, inspirational and about a 17-year-old, horrible things and all. But I don’t call the shots or keep the money.

“You’ll read this book in one breathless sitting, but the story will stay with you. Riggle, the 17-year-old orphaned protagonist, is exactly what we all need. He’s on a deadline but out of cell phone data to search for answers. Toggling between his memory and the present, he must discern for himself what he feels, how he will survive, and how he will process his grief; in so doing, he is able to better empathize with everyone he encounters. Riggle is also very funny and filled with all of the wonderful contradictions that make us human. Opioid, Indiana is vulnerable and unflinching. It’s a beautiful, original story.”
— Tiffany Lauderdale Phillips, Wild Geese Books, Franklin, IN

During a week-long suspension from school, a teenage transplant to impoverished rural Indiana searches for a job, the whereabouts of his vanished drug-addicted guardian, and meaning in the America of the Trump years. Seventeen-year-old Riggle is living in rural Indiana with his uncle and uncle's girlfriend after the death of both of his parents. Now his uncle has gone missing, probably on a drug binge. It's Monday, and $800 in rent is due Friday. Riggle, who's been suspended from school, has to either find his uncle or get the money together himself. His mission exposes him to a motley group of Opioid locals-encounters by turns perplexing, harrowing, and heartening. Meanwhile, Riggle marks each day by remembering the mythology his late mother invented for him about how the days got their names. With amazing directness and insight, Carr explores what it's like to be a high school kid in in the age of Trump, a time of economic inequality, addiction, confederate flags, and mass shootings. A work of empathy and insight, Opioid, Indiana pierces to the heart of our moment through an unforgettable protagonist.