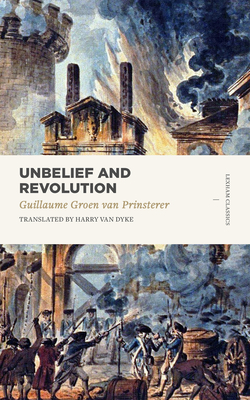 God's word illumines the darkness of society. Groen van Prinsterer's Unbelief and Revolution is a foundational work addressing the inherent tension between religion and modernity. As a historian and politician, Groen was intimately familiar with the growing divide between secular culture and the church in his time. Rather than embrace this division, these lectures, originally published in 1847, argue for a renewed interaction between the two spheres. Groen's work served as an inspiration for many contemporary theologians, and as a mentor to Abraham Kuyper, he had a profound impact on Kuyper's famous public theology. Harry Van Dyke, the original translator, reintroduces this vital contribution to our understanding of the relationship between religion and society.

Willem Groen van Prinsterer (1801-1876), was a Dutch historian and statesman. An evangelical Calvinist, he fathered the anti-revolutionary, Christian-democratic movement in Holland. Harry Van Dyke (D.Litt., Free University of Amsterdam) is a professor emeritus of history at Redeemer University College in Ancaster, Ontario, and a fellow of the Dooyeweerd Centre for Christian Philosophy.