Loving the Dead and Gone (Paperback) 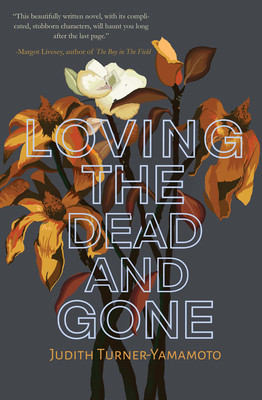 “This beautifully written novel, with its complicated, stubborn characters, will haunt you long after the last page.” —Margot Livesey, Author of The Boy in The Field

The death of Donald Ray in a freak car accident becomes the catalyst for the release of passions, needs, and hurts. Clayton’s discovery of dead Donald Ray upends his longtime emotional numbness. Darlene, the seventeen-year-old widow, struggles to reconnect with her late husband while proving herself still alive. Soon Clayton and Darlene's bond of loss and death works its magic, drawing them into an affair that brings the loneliness in Clayton’s marriage to a crisis. When Aurilla Cutter, Clayton’s mother-in-law, learns about the affair, her own memories of longing and infidelity are set loose. Like Darlene's passions—unappeased and clung to—Aurilla’s possess an intensity that denies life to the present. As Aurilla’s own forbidden and tragic story of love, death, and repeated loss alternates with Darlene's and Clayton’s, the divide of generations narrows and collapses, building to the unlikely collision.

Judith Turner-Yamamoto's work has appeared in StorySOUTH, Mississippi Review, American Literary Review, and in many anthologies, including Walking the Edge, Show Us Your Papers, and Gravity Dancers. Her fellowships and awards include the Virginia Arts Commission, the Ohio Arts Council, the VCCA, the Thomas Wolfe Fiction Prize, and the Virginia Screenwriting Award. An art historian, her articles are published in Travel + Leisure, Elle, Art & Antiques, Interiors, and The Boston Globe.

“Loving the Dead and Gone is an absorbing account of two generations of women, living in North Carolina, who struggle to put love at the centre of their lives.  How well Turner-Yamamoto understands the complexities of passion, the necessity of work, and the limits of small towns.  This beautifully written novel, with its complicated, stubborn characters, will haunt you long after the last page.” —Margot Livesey, author of The Boy in The Field

“There has been an accident in tiny Gold Ridge, a place where most lives revolve around farming the earth or working the hosiery mill, and everyone is changed by it. In a voice that rings with the colloquial timbre of William Faulkner melded with the rural realism of Carol Chute’s The Beans of Egypt, Maine, Judith Turner-Yamamoto brilliantly uses a tragedy to draw us into a place so real you can smell it, where her tapestry of narrator voices captivates us with empathy and love. I was fortunate to be on the panel of the Ohio Artistic Awards in Literature that chose to award Loving the Dead and Gone, recognizing its lyric strength and deep and empathic understanding of rural America." —Elizabeth Cohen, author of The Hypothetical Girl

"Turner-Yamamoto's multigenerational saga reminds me of Bobbie Gentry’s great Patchwork album, with a touch of William Goyen, Lee Smith, and Our Town. This bittersweet paean to a NC Piedmont hosiery mill town is a mid- 20th century time capsule of car wrecks, nerve medicine, open caskets, ghosts, and gossip. Bad luck and trouble ricochet between families until desire and memories are swept away. And yet, the female lens and circular narrative make Loving the Dead and Gone a sensory delight." —Richard Peabody, editor, Gargoyle Magazine

“Judith Turner-Yamamoto's Loving the Dead and Gone is a love story that begins with a tragedy, proceeds through loss and suffering, and winds up in a place of deeply earned redemption. Though there are several characters who guide us through this unstoppable narrative, none is more breathtakingly rendered that Aurilla Cutter. Women like Aurilla, we say in the South, will live forever because they're too mean to die. Ah, but Aurilla has a past that will touch your heart and explain her present. She's an unforgettable character among a cast of unforgettables, from her put-upon daughter Berta May, to the heartbroken and fiery seventeen-year-old widow, Darlene, to Berta May's haunted husband, Clayton. Actually, everything about Loving the Dead and Gone, to Judith Turner-Yamamoto's great credit, is unforgettable." —Ed Falco, author of the New York Times Best Seller, The Family Corleone

“Judith Turner-Yamamoto has written a brilliantly lyrical novel born of her native Southern heritage. Within these pages are the compelling and unforgettable characters of a North Carolina family steeped in love and generational conflict tempered by a tough country spirit.”—Kay Sloan, author of The Patron Saint of Red Chevys, a Barnes and Noble Discover Great New Writers selection

"Turner-Yamamoto’s bittersweet fantastical debut involves the parallel stories of two grieving women… As Aurilla says near the end, “Loving the dead and gone was the sweetest love of all.” Reading this story is almost as delectable." —Publishers Weekly