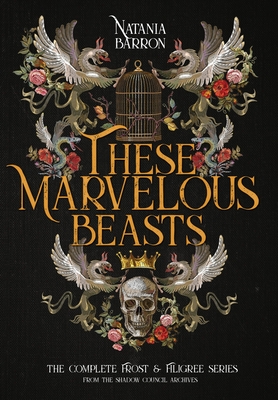 NC author Natania Barron has released her quirky and stylish trilogy of novellas as one epic fantasy/romance/adventure spanning three decades. Follow Vivienne and Nerissa from New York, across the globe, and into The Underworld.

After centuries of adventures, arguments, and unrequited love, Nerissa Waldemar, a lamia, finds herself retiring to Tarrytown, New York with the very object of her affection, the deadly and beautiful sylph, Vivienne du Lac. She's hoping for some time alone to share her dark hearts' innermost thoughts; but of course, even lamia's plans often fall astray. Before Nerissa is able to tell Vivienne just how much she loves her--no small feat for a cold-blooded snake--they are both tapped to help solve the mystery hounding the Circle of Iapetus, a strange society of mortals concerned with the doings of supernatural beings.

To make matters worse, Worth Goodwin, Vivienne's old paramour, reappears to the sylph's absolute shock and dismay (to be fair, Nerissa and he did fake his death about a hundred years ago). And on his arm is the young, sweet, radiant, and altogether too-smart-for-her-own-good Christabel Crane, which of course sends Vivienne into a jealous downward spiral. Nerissa finds her own baser nature rising up to meet her, threatening to undo years of work in order to live among humans peacefully, but not before a horrific monster, preying on other supernatural beings, rises to destroy them. The team must work together to save both Tarrytown--and themselves--before it's too late.

But when Vivienne is captured, well... all bets are off.

What ensues are a series adventures around the glove, from the sandy streets of Cairo to the foggy alleyways of London, as Waldemar, Goodwin, and Crane seek to find Vivienne and uncover the strange machinations leading up to her abduction... not to mention a series of bizarre murders, sightings, and disappearances. With a kitsune named Kit, a dwarf named Alma, a dandy Vampire named Micheaux, and a whole ramshackle group of supporting gods, monsters, and allies, they just might have a chance.