The Echo Man: A Novel (Hardcover) 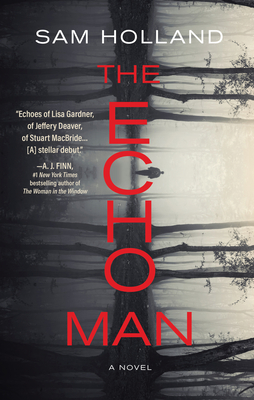 Detectives Cara Elliott and Noah Deakin are on the case of a series of seemingly unconnected murders, each different in method, but each shocking and brutal. As the body count increases, they can’t ignore the details that echo famous cases of the past—Manson, Kemper, Dahmer, and more. As Elliott and Deakin get closer to unmasking the killer, the murders are moving closer to home.

Meanwhile, Jessica Ambrose is on the run. She’s been implicated as the arsonist who killed her neglectful husband and injured her young daughter. With the help of disgraced and suspended detective Nate Griffin, Jess discovers a shocking link between her case and that of the ultimate copycat killer working on his horrifying masterpiece.

Sam Holland is a debut author and self-confessed serial killer geek, who lives near Southampton.

“Debut novelist Sam Holland has produced a harrowing plot . . . The numerous plot twists along the way will keep you engaged and guessing as you try to figure out exactly what is going on.”
—BookReporter

“Echoes, yes: echoes of Lisa Gardner, of Jeffery Deaver, of Stuart MacBride – The Echo Man evokes that same classic, satisfying, red-blooded fear. But Sam Holland’s stellar debut is very much its own beast, wily and brawny and dangerous: a lethal new predator in an alluringly old-school skin.”
—AJ Finn, New York Times bestselling author of The Woman in the Window

“The Echo Man is a thrillingly paced novel that disturbs and surprises in equal measure—part police procedural and part nightmare.”
—Scott Phillips, bestselling author of The Ice Harvest

“Grisly and graphic, Sam Holland is on disturbingly good form in The Echo Man . . . will keep you gripped.”
—Jo Furniss, Amazon Charts bestselling author of The Last to Know

“The Echo Man is all at once captivating and terrifying. Sam Holland gives the darkness a full embrace in this violent and disturbing exploration of a serial killer and the broken people he leaves in his wake.” —Kate Myles, author of The Receptionist

“What a delightfully dark, wildly fun and highly original take on the serial killer thriller. Everyone should read it!”
—A. J. Park, author of The First Lie and Don’t Speak

“A twisted killer, an impossible case and all too human heroes trying to solve it; The Echo Man is a page turner that will prove irresistible to crime thriller readers. Simultaneously macabre and deeply empathetic, it somehow manages to both chill your blood and warm your heart, often in the same scene. Unmissable.”
—Gabriel Bergmoser, author of The Hunted and The Inheritance

“From the first page this book will grip you by the throat, hold you suspended and let you down with bang. It’s a dark rollercoaster of a read.”
—Rachael Blok, author of The Scorched Earth and Under the Ice

“The Echo Man delivers everything you want with a psycho thriller . . . Absolutely first class!”
—James Delargy, author of 55 and Vanished

“The Echo Man takes serial killer thrillers to a new level. A deliciously dark descent into a deranged mind. Nobody is safe. This one will stay with you long after the last page.”
—Robert Scragg, author of End of the Line and What Falls Between the Cracks

“Keeps you suspended through nail-biting twists and turns until its darkly thrilling conclusion.”
—Amy McLellan, author of Remember Me

“Intelligent writing, brilliant relatable characters and a kick-arse twist in the tail.”
—Alison Belsham, author of The Tattoo Thief and The Embalmer

"Bold, bloody and brilliant . . . Reminiscent of Thomas Harris’ Red Dragon, The Echo Man is more than unsettling - it's terrifying."
—Heather Critchlow, contributor to Afraid of the Light and Afraid of the Christmas Lights

“A bonkers book that is all the more worthwhile for being bonkers . . . The Echo Man doesn't simply show the kind of sadism that is born in moral barrens, it depicts it as a reflection of real world violence that has been entered into our popular culture.”
—Dominic Nolan, author of Past Life and After Dark