This Isn't Going to End Well: The True Story of a Man I Thought I Knew (Hardcover) 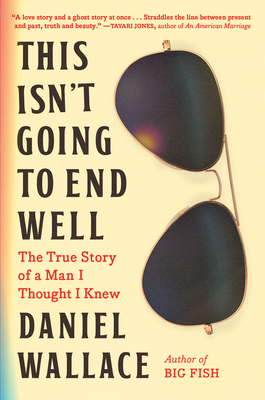 In this powerful memoir, the bestselling author of Big Fish tries to come to terms with the life and death of his multi-talented longtime friend and brother-in-law, who had been his biggest hero and inspiration, in a poignant, lyrical, and moving memoir.

If we’re lucky, we all encounter at least one person whose life elevates and inspires our own. For acclaimed novelist Daniel Wallace, he had one hero and inspiration for so much of what followed: his longtime friend and brother-in-law William Nealy. Seemingly perfect, impossibly cool, William was James Dean, Clint Eastwood, and MacGyver all rolled into one, an acclaimed outdoorsman, a famous cartoonist, an accomplished author, a master of all he undertook, William was the ideal that Daniel sought to emulate.

But when William took his own life at age 48, Daniel was left first grieving, and then furious with the man who broke his and his sister’s hearts. That anger led him to commit a grievous act of his own, a betrayal that took him down a dark path into the tortured recesses of William’s past. Eventually, a new picture of William emerged, of a man with too many secrets and too much shame to bear.

Daniel Wallace is the author of six novels, including Big Fish, which was adapted and released as a movie and a Broadway musical. His novels have been translated into over three-dozen languages. His essays and interviews have been published in The Bitter Southerner, Garden & Gun, Poets & Writers and Our State magazine, where he was, for a short time, the barbecue critic. His short stories have appeared in over fifty magazines and periodicals. He was awarded the Harper Lee Award, given to a nationally recognized Alabama writer who has made a significant lifelong contribution to Alabama letters. He was inducted into the Alabama Literary Hall of Fame in 2022. He is the J. Ross MacDonald Distinguished Professor of English at the University of North Carolina at Chapel Hill.

“A revelatory and reflective tale about how males perceive others and how they present themselves.  More than anything, I felt compassion for their vulnerability and fear, and made me realize perhaps we are not so different, men and women, after all.”—Sandra Cisneros, author of Martita, I Remember You

“In This Will Not End Well you will find the expected Daniel Wallace clarity, humor, and precision. But you will not find fiction. This is a true story about Daniel himself and his wild-man mentor and relative, William Nealy. Few writers can so seamlessly thread together love, loss, admiration, fear, pain, and hope. And this narrative is not traditional memoir-fare. It moves magically—unlike any traditional genre you’ve ever read. At times I experienced that thrill-feeling of a roller coaster dropping away from beneath me. This book is a rare gem gift from one of our very best writers.”—Clyde Edgerton, author of Raney

“Daniel Wallace has written a ghost story – not the kind you have read before. It is a haunting story about a person he loved and, at times, loathed, who influenced the author’s life in ways never to be fully known or seen – a shimmering. Wallace -- whose prose is the truest kind, brave and somewhere between sharp-edged facts and magic -- chooses to “get in the cage with the tiger”, in this case, his brother-in-law William Nealy. Nealy is the famed cartoonist, writer, and whitewater adventurer who lived to defy death daily, until he didn’t. Wallace takes us to the edge of what scares us, death by suicide, and miraculously (no, skillfully) writes a book on grace.
This brilliantly layered book is about what calls us to write, create, dance and even destroy those we love. What began as Daniel Wallace’s story became my story, too – the writer who lives “in that place between experience and understanding” and is compelled to touch bone regardless of the pain.  I love this book. This Isn’t Going to End Well ended too soon -- and like all great ghost stories I want to read it again.”—Terry Tempest Williams, author of Erosion – Essays of Undoing

﻿“Daniel Wallace has, once again, shown himself to be an exquisite storyteller.  Like bourbon, this book goes down hot and strong but finishes with a salving sweetness which can only be called a blessing.  A love story and a ghost story a once, This Isn’t Going to End Well straddles the line between present and past, truth and beauty.”—Tayari Jones, author of An American Marriage

“A bold and compassionate exploration of male friendship and the devastating impact of suicide.”—Kirkus Reviews