Far Side of the Moon: Apollo 8 Commander Frank Borman and the Woman Who Gave Him Wings (Hardcover) 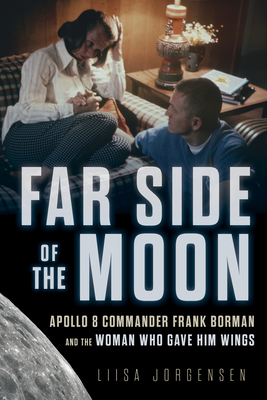 I have been a fan of the history of the "space race" for most of my life.  I've read every book about NASA, astronauts, launch facilities, and even cosmonauts, that I could get my hands on. The achievements and courage of the astronauts are the stuff of legend.  But one thing that hardly ever gets reported is the price that the families paid.  Far Side of the Moon by Liisa Jorgensen gives us a look into that subject. I was a military brat myself, so I had some idea of the hardships of having a loved one away from home; but I didn't have the press constantly watching my every move.  This book takes a deep dive into the price that Susan Borman, wife of the Commander of the first mission to take humans to the moon, paid for her country.  The men were always focused on "the Mission".  Their families were supposed to show a good face, be "pleased and proud" about every flight, and shut up about any fears or doubts they might have.  Susan Borman was married to, arguably, the best astronaut in the program.  She kept up the facade of the perfect wife of an astronaut.  But, behind the scenes she was falling apart, turning to alcohol to cope with the pressures.  Far Side of the Moon tells her story of pain and responsibility.  It also tells us of the love between Frank and Susan, so it is ultimately a story of hope. It is truly what the sub-title says, a story of "Apollo 8 Commander Frank Borman and the Woman Who Gave Him Wings".

Far Side of the Moon  is the untold, fully authorized story of the lives of Frank and Susan Borman. One was a famous astronaut—an instrumental part of the Apollo space program—but the other was just as much a warrior. This real-life love story is far from a fairy tale.

Life as a military wife was beyond demanding, but Susan always rose to the occasion. When Frank joined NASA and was selected to command the first mission to orbit the moon, that meant putting on a brave face for the world as her husband risked his life for the space race. The pressure and anxiety were overwhelming, and eventually Susan’s well-hidden depression and alcoholism finally came to light. Frank had to come to terms with how his “mission above all else” mentality contributed to his wife’s suffering. As Susan healed, she was able to begin helping others who suffered in silence from mental illness and addiction.

Discover how Frank and Susan’s love and commitment to each other is still overcoming life’s challenges, even beyond their years as an Apollo commander and the founder of the Astronaut Wives Club.

Liisa Jorgensen has worked as a writer and story editor on a diverse variety of film and television productions for Myth Merchant Films. Jogensen has written Far Side of the Moon with the active support of Frank Borman. She lives in Edmonton, Alberta, Canada.

“This is a true love story—it has it all: adventure, sacrifice, fear, perseverance, redemption and heartbreak.” —Dee O’Hara, nurse to the astronauts of the Mercury, Gemini, and Apollo programs

"This exceptional book presents the true perspective of those intense, high-energy, high-visibility years of Apollo, especially the challenging roles of the families. Susan and Frank Borman were leaders in the community, respected and admired by all—and this book will tell you why. As a husband, an astronaut, and a manager, Frank Borman was a true leader, the epitome of 'Stand by Me.' And Susan's story is the most accurate description of the lives of the 'astronaut wives' I have ever read, from the glory of success to the grievance of loss. Enjoy this insightful book, and you will learn more about the human story of Apollo, especially about many of us who were fortunate to have participated." —David Scott, astronaut on Gemini VIII, Apollo 9, and Apollo 15

“Countless books have been published about the Apollo era, but this one stands apart, highlighting the “ride” taken by an Apollo family. The author shares the ride in wonderful detail, bringing the reader along on the very personal voyage of Susan Borman, who gave Frank wings. This is Susan’s story, well told and well deserved.” —Michael Collins, astronaut on Gemini X, Apollo 11

“Far Side of the Moon is a beautiful true story of how deep love and God’s grace carried Sue and Frank Borman through very difficult times. We believe the book expresses an honest account of many of the families working at NASA during the US race for the moon—the ambition, competition, and pressures on the astronauts, plus the stresses, loneliness, and sacrifices of the wives, was very real. The reader is shown that the same issues in marriages occur in careers other than the space program. We highly recommend this very personal story.” —Dotty and Charlie Duke, astronaut on Apollo 16

“Liisa Jorgesen artfully captures the humanity, indeed the love, that was formed, sustained, and continues today between Frank and Susan Borman in the midst of great odds. Far Side of the Moon has two heroes in that sweeping relationship.” —Capt. Phil “Rowdy” Yates (USN Ret.), Chief US Navy Test Pilot, Joint Strike Fighter CDP

“As astronaut's wives, Susan Borman and I shared the highs and lows during the two missions our husbands flew together. I believe that Far Side of the Moon captures the unseen human side of what it was really like to be an Apollo family.” —Marilyn Lovell, wife of James Lovell, astronaut on Gemini 7, Gemini 12, Apollo 8, and Apollo 13


"For readers of Lily Koppel’s The Astronaut Wives Club (2013), this is a more personal and focused story, a tale in which few punches are pulled, and all the collateral damage of being one of America’s heroes is laid bare." — Booklist