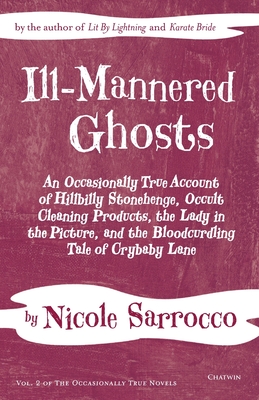 This is book number 2 in the Occasionally True Novels series.

Sometimes, the walls can talk. And the stories they tell are usually the last thing you were expecting. For Nicole, whip-smart and happily married mother of two, the stories are everywhere--emanating from the old family land, leaping out of old photographs, trailing her in a field at midnight--and the trick is to sort out which ones need listening to and which ones just need a good telling-off.

The bizarrely hilarious misadventures of one woman's sometimes ghostly experiences that began in "Lit by Lightning" continue in "Ill-Mannered Ghosts," and if it's possible, the tales just get stranger. Prompted by an out-of-the-blue phone call one autumn day, Nicole returns to the scene of a series of bizarre historical occurrences--her childhood home. What ensues is an adventure in mental spelunking that threatens to destabilize her whole family as they move "back to the old homeplace" to face down the demons of chaos and just plain weirdness.

The second book in this unforgettable series is another disturbingly enjoyable journey to the madly brilliant world of North Carolina author Nicole Sarrocco. Family, spirits, and plain folks jostle for attention in a jarringly-real-meets-chaotically-dreamlike story that can only be called Occasionally True.