The Geomancer: Vampire Empire: A Gareth and Adele Novel (Paperback) 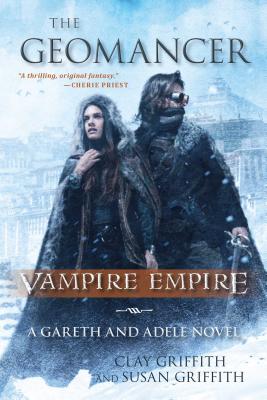 By Clay Griffith, Susan Griffith
$17.00
Email or call for price.

The first Gareth and Adele Novel, The Geomancer is the start of an ongoing, character-based, urban fantasy series set in the same Vampire Empire universe as the authors’ previous trilogy! The uneasy stalemate between vampires and humans is over. Adele and Gareth are bringing order to a free Britain, but bloody murders in London raise the specter that Adele's geomancy is failing and the vampires might return. A new power could tilt the balance back to the vampire clans. A deranged human called the Witchfinder has surfaced on the Continent, serving new vampire lords. This geomancer has found a way to make vampires immune to geomancy and intends to give his masters the ability to kill humans on a massive scale. The apocalyptic event in Edinburgh weakened Adele's geomantic abilities. If the Witchfinder can use geomancy against humanity, she may not have the power to stop him. If she can't, there is nowhere beyond his reach and no one he cannot kill. From a Britain struggling to rebuild to the vampire capital of Paris, from the heart of the Equatorian Empire to a vampire monastery in far-away Tibet, old friends and past enemies return. Unexpected allies and terrible new villains arise. Adele and Gareth fight side-by-side as always, but they can never be the same if they hope to survive.

Clay and Susan Griffith, a married couple who have written and published together for more than two decades, are the authors of the Vampire Empire trilogy—The Greyfriar, The Rift Walker, and The Kingmakers—and the Crown & Key trilogy, as well as the first Vampire Empire: A Gareth and Adele novel, The Geomancer. Their credits include numerous short stories featuring noted genre characters like Kolchak the Night Stalker and the Phantom and comic books including The Tick and The Simpsons. They've also written scripts for the television/web show Monster Creature Feature. They live in North Carolina where they play World of Warcraft and struggle to entertain their cat.

“Action and intrigue in a complex, well-imagined world. A well-told tale, with plenty of excitement.”

“Clay and Susan Griffith have done it again—brilliant worldbuilding with heartfelt characters result in a book that is intricate, beautiful, and impossible to put down.”

—KRISTEN PAINTER, award-winning author of the House of Comarré series

"Vampire Empire is one of the best fantasy series I've read, set in a unique postapocalyptic world. The landscapes, the peoples, and the incredible gizmos will attack your senses. Their unforgettable characters will stay with you as the tale unwinds." - RT Book Reviews