Of Fire and Ash: (The Fireborn Epic Book 1) (Hardcover) 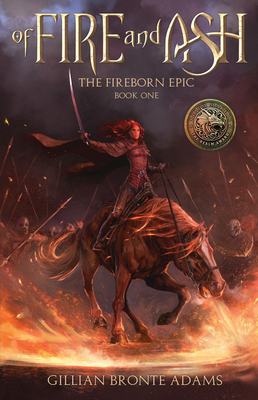 She rides a fireborn, a steed of fire and ash, trained for destruction. Ceridwen tal Desmond dreams of ruling like her father over the nation of Soldonia, where warriors ride to battle on magical steeds--soaring on storm winds, vanishing in shadow, quaking the earth, and summoning the sea. After a tragic accident claims her twin brother, she is exiled and sworn to atonement by spending her life--or death--for her people. But when invaders spill onto Soldonia's shores and traitors seize upon the chaos to murder her father, Ceridwen claims the crown to keep the nation from splintering. Combatting overwhelming odds and looming civil war, she begins to wonder if the greatest threat to the kingdom may, in fact, be her. With fire before her and ash in her wake, how can she hope to unite instead of destroy? Flames rage and oceans rise in this explosive first installment of The Fireborn Epic as the exiled heir, a novice priest, and a reluctant rebel wage war against a hidden power that threatens to shake the world.

Gillian Bronte Adams is a sword-wielding, horse-riding, wander-loving fantasy author, rarely found without a coffee in hand and rumored to pack books before clothes when she hits the road. Working in youth ministry left her with a passion for journeying alongside children and teens. (It also enhanced her love of coffee.) Now, she writes novels that follow outcast characters down broken roads, through epic battles, and onward to adventure. And at the end of a long day of typing, she can be found saddling her wild thing and riding off into the sunset, seeking adventures of her own (and more coffee). She loved to connect with readers online at www.gillianbronteadams.com.