Guests on Earth: A Novel (Hardcover) 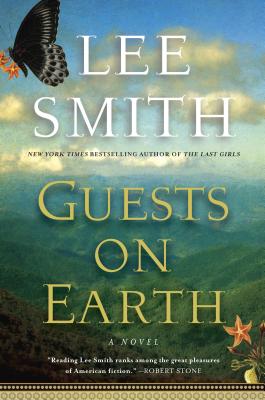 By Lee Smith
Email or call for price
Hard to find: allow 24 hours for information

“This is a haunting story about the treatment of mental illness in the early 1900s. Focusing on Highland Hospital in Asheville, North Carolina, where Zelda Fitzgerald died in the fire that destroyed the hospital in 1948, the story is told through the voice of Evalina Toussaint who was sent to the hospital as a young child. Evalina's narrative is an example of the brutal early treatment of mental illness, when some patients became subjects for medical experiments. Any fan of the Fitzgeralds, the medical profession, or the history of medicine in the early 1900s will enjoy this book.”
— Jackie Willey, Fiction Addiction, Greenville, SC

“Reading Lee Smith ranks among the great pleasures of American fiction . . . Gives evidence again of the  grace and insight that distinguish her work.” —Robert Stone, author of Death of the Black-Haired Girl

It’s 1936 when orphaned thirteen-year-old Evalina Toussaint is admitted to Highland Hospital, a mental institution in Asheville, North Carolina, known for its innovative treatments for nervous disorders and addictions. Taken under the wing of the hospital’s most notable patient, Zelda Fitzgerald, Evalina witnesses cascading events that lead up to the tragic fire of 1948 that killed nine women in a locked ward, Zelda among them. Author Lee Smith has created, through a seamless blending of fiction and fact, a mesmerizing novel about a world apart--in which art and madness are luminously intertwined.

Born in the small coal-mining town of Grundy, Virginia, Lee Smith began writing stories at the age of nine and selling them for a nickel apiece. Since then, she has written seventeen works of fiction, including Fair and Tender Ladies, Oral History, and, most recently, Guests on Earth. She has received many awards, including the North Carolina Award for Literature and an Academy Award in Fiction from the American Academy of Arts and Letters; her novel The Last Girls was a New York Times bestseller as well as winner of the Southern Book Critics Circle Award. She lives in Hillsborough, North Carolina, with her husband, the writer Hal Crowther. Visit her at www.leesmith.com.

“[An] elegant historical novel . . . Lee Smith is an assured and accomplished writer, and her use of Zelda as a subject in Guests on Earth is brilliant . . . This is a carefully researched, utterly charming novel. By the time you finish it, you fall in love with these fascinating lives, too.” —The Washington Post

“Guests on Earth is a mesmerizing novel about a time and place where creativity and passion, theory and medicine, fact and fiction, are luminously intertwined.” —BookPage

“Indeed, most of the high spirited, rebellious, outspoken women who populate Guests on Earth would not now be considered insane at all. Smith’s imaginative, layered story illuminates the complexity of their collective plight—to be put in towers until they had no choice but to behave—and rescues them one by one.” —The Atlanta Journal-Constitution

“[An] engaging and engrossing novel . . . Smith’s well-developed characters, rich historical detail and easy prose create a novel that some may call her best yet, and which it just may be.” —Minneapolis Star Tribune

“Those who enjoyed Smith’s previous work (e.g., Fair and Tender Ladies; The Last Girls) will certainly appreciate this absorbing book, as will those interested in the history of treating mental illness in the United States and fans of Southern or Appalachian fiction.” —Library Journal

“With Guests on Earth, Lee Smith shines new light on a shadowy, complex subject . . . She offers a broader historical perspective--and with it, a captivating, inimitable voice.” —The Raleigh News and Observer

“This is Lee Smith at her powerful best, writing the South she knows through the eyes of a woman who lived it.” —Adriana Trigiani, author of Big Stone Gap and The Shoemaker's Wife

“In Guests on Earth Lee Smith gives evidence again of the grace and insight that distinguish her work. Her characters are realized with singular intensity, the most vivid interior life, and flawless dialogue. Reading Lee Smith ranks among the great pleasures of American fiction.” —Robert Stone, author of Death of the Black-Haired Girl and Dog Soldiers