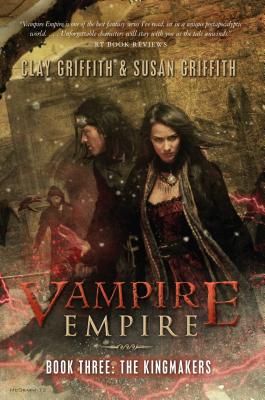 By Clay Griffith, Susan Griffith
$17.95
Email or call for price.

The epic Vampire Empire trilogy rushes to a heart-wrenching conclusion of honor and love, hatred and vengeance, sacrifice and loss. A war to the death. Empress Adele has launched a grand crusade against the vampire clans of the north. Prince Gareth, the vampire lord of Scotland, serves the Equatorian cause, fighting in the bloody trenches of France in his guise as the dashing Greyfriar. But the human armies are pinned down, battered by harsh weather and merciless attacks from vampire packs. To even the odds, Adele unleashes the power of her geomancy, a fearsome weapon capable of slaughtering vampires in vast numbers. However, the power she expends threatens her own life even as she questions the morality of such a weapon. As the war turns ever bloodier and Adele is threatened by betrayal, Gareth faces a terrible choice. Their only hope is a desperate strike against the lord of the vampire clans--Gareth's brother, Cesare. It is a gamble that could win the war or signal the final days of the Greyfriar.