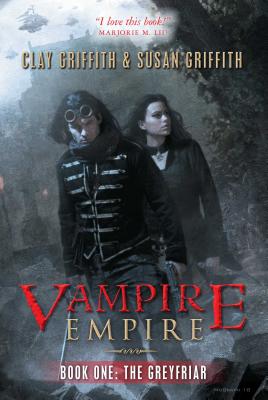 Rousing pulp action and steampunk come together in a spellbinding story of high adventure and alternate history. In the year 1870, a horrible plague of vampires swept over the northern regions of the world. It is now 2020 and a bloody reckoning is coming. Princess Adele is heir to the Empire of Equatoria, a remnant of the old tropical British Empire. When she becomes the target of a merciless vampire clan, her only protector is the Greyfriar, a mysterious hero who fights the vampires from deep within their territory. Their dangerous relationship plays out against an approaching war to the death between humankind and the vampire clans. The first book in a trilogy of high adventure and alternate history, the Vampire Empire series brings epic political themes to life within a story of heartbreaking romance, sacrifice, and heroism.