The Empires of Atlantis: The Origins of Ancient Civilizations and Mystery Traditions throughout the Ages (Paperback) 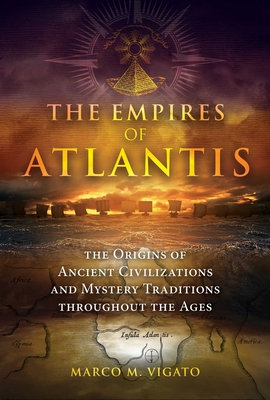 • Traces the course of Atlantean civilization through its three empires, as well as the colonies and outposts formed by its survivors in Egypt, Göbekli Tepe, India, Mesopotamia, the Mediterranean, and North and South America

Exploring more than 100,000 years of Earth’s history, Marco Vigato combines recent discoveries in the the fields of archaeology, geology, anthropology, and genetics with the mystery teachings of antiquity to investigate the true origins of civilization. Establishing the historical and geological reality of Atlantis stretching all the way back to 432,000 BCE, he traces the course of Atlantean civilization through its three empires, revealing how civilization rose and fell several times over this lengthy span of time.

The author shows that Atlantis did not vanish “in one terrible day and night” but survived in a variety of different forms well into the historical era. He reveals how the the first Atlantean civilization lasted from 432,000 to 35,335 BCE, the second one from 21,142 to 10,961 BCE, and the third Atlantis civilization--the one celebrated by Plato--collapsed in 9600 BCE, after the Younger Dryas cataclysm. The author examines the role of Atlantean survivors in restarting civilization in different parts of the world, from Göbekli Tepe and Egypt to India, Mesopotamia, and the Americas. He personally documents their colonies and outposts around the globe, offering unique views of the colossal network of pyramids, earthen mounds, and other megalithic monuments they le behind. He shows how these monuments testify to the survival of a sacred science of Atlantean origin, and he documents the survival of the primeval Atlantean tradition through various secret societies into the modern era.

Drawing on more than 500 ancient and modern sources and sharing never-before-seen photographs from his own personal exploration of hundreds of archaeological sites around the world, Vigato shows not only that Atlantis was real but that the whole world is now being called to become a New Atlantis and awaken into a new golden age.

Marco M. Vigato has has dedicated the past 15 years to documenting the evidence of ancient advanced civilizations around the world. The author of several research papers, documentaries, and the popular blog Uncharted Ruins, he holds degrees from Harvard Business School and Bocconi University. A native of Italy, he lives in Mexico City.

“For the complete library of all things Atlantis, Marco Vigato has written the kind of indispensable resource that fills in the details of this immense story as very few have. The Empires of Atlantis is a treasure trove of ancient lore that true Atlantis fans everywhere will be consulting for a long time to come.”
— J. Douglas Kenyon, author of Ghosts of Atlantis

“Atlantis is one of the greatest enigmas of the past still to be solved. Every year new facts and theories emerge, which together form pieces of a grand puzzle that will one day take us to the gates of a long-lost civilization. In The Empires of Atlantis author Marco Vigato reveals another important piece of that jigsaw. Thoroughly recommended.”
— Andrew Collins, coauthor of Denisovan Origins

“Marco Vigato sifts through the literary evidence throughout the ages and paints a picture of human history everyone should know. Packed with knowledge from the Cro-Magnon caves of France to Xochicalco, Mexico, Egypt, and the medieval cathedrals of Europe, The Empires of Atlantis is as enjoyable as it is informative and inspiring.”
— Ed Malkowski, author of Ancient Egypt 39,000 BCE

“I don’t know of anyone else who has the scope and vision to try to reconcile, let us say, Guenon, Sitchin, and contemporary science!”
— Joscelyn Godwin, author of Atlantis and the Cycles of Time

“Marco Vigato’s well-researched and insightful book reveals an ancient, unknown megalithic civilization, adept at constructing magnificent pyramids and highly stylized buildings in faraway places such as Egypt, Mexico, and Peru. These people appear to be part of a worldwide culture and possibly the fabled Atlantis, representing a missing epoch of a maritime nation in possession of a science and technology that is still beyond our perception. This is an important book that advances our understanding of the past.”
— Cliff Dunning, writer and host of the Earth Ancients podcast

“In addition to his own insightful outlook on the subject, Marco Vigato does us the very great service of pulling together many of the salient perspectives on Atlantis, drawn from many of the most respected historical and esoteric commentators.”
— Laird Scranton, author of Primal Wisdom of the Ancients

“Marco Vigato’s quest to merge modern science with the Western esoteric tradition is a daunting goal, but this author is up to the challenge as he tackles this ambitious subject in the pages of The Empires of Atlantis. He brings a clear vision to his thoughtful exploration of sacred sites and the intriguing mysteries surrounding ancient monuments around the globe.”
— Rand Flem-Ath, coauthor of Atlantis beneath the Ice

“Vigato’s argument, which draws from a wide range of sources from ancient texts and esoteric teachings to the latest discoveries in archaeology and genetics, is compelling. The implications of his book are far-reaching. The Empires of Atlantis is a must-read for those interested in alternative archaeology and the open-minded in the academic community who can appreciate Vigato’s impeccable research and scholarship.”
— Mark Carlotto, author of Before Atlantis

“The Empires of Atlantis will take you on a journey back in time. If you have ever wondered what it was like to travel back in time and see the world our ancestors built and understand the legacy they left for us, then this is where you start.”
— Ivan Petricevic, filmmaker and founder of Ancient Code

“Of the many hundreds of books written about Atlantis over the last twenty-four centuries, The Empires of Atlantis is unique. Marco Vigato synthesizes the rational criteria of modern science with the legacy of Western esoteric tradition to offer his different perspective on a familiar subject readers will find at once engagingly credible and eerily contemporary.”
— Frank Joseph, author of The Destruction of Atlantis

"In a period of less than 10,000 years, our planet could have been struck no fewer than four times by debris from a disintegrating comet circulating in the solar system, each time either destroying or stultifying civilization restarted in the aftermath by surviving Atlantean culture bearers. This is the engrossing theory put forward by Marco M. Vigato in The Empires of Atlantis, an impressively researched, almost encyclopedic, work which for me, as one fascinated by the debate around the origins of civilization, was a riveting read."
— Geoff Ward, book editor and journalist