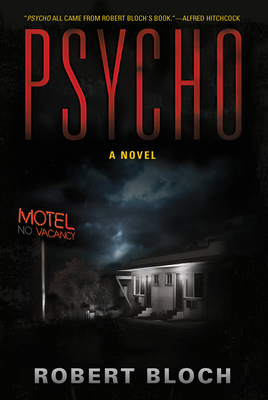 If you love to be scared, or are a fan of classic movies, then you know the story of Norman Bates, his mother, and the dark and frightening Bates Motel. Alfred Hitchcock’s taut, shocking scare-fest starring Anthony Perkins and Janet Leigh is a classic movie, as scary today as it was in 1960 when it was first released. The shower scene may be the most famous scene in movie history.

Here is the 1959 novel upon which the movie is based. Robert Bloch based his taut psychological thriller on the all-too-real story of Ed Gein, a psychotic murderer who led a dual life. It was here that the legend of the Bates Motel was born.

Norman Bates loved his mother, though she has been dead for the past twenty years. Or is she dead? Norman knows better. He has lived with Mother ever since leaving the hospital in the old house up on the hill above the rundown Bates Motel. One night Norman welcomes a beautiful woman who checks into the motel, and spies on her as she undresses. Norman can’t help himself. Mother is there, though. She is there to protect Norman from his filthy thoughts. She is there to protect him with her butcher knife!

The story of Norman Bates and his mother has become one of the best known in the annals of horror. But if you only know the Hitchcock movie or The Bates Motel prequel television series starring Freddie Highmore as Norman Bates and Vera Farmiga as his mother, then you don’t know the whole story, because it was Robert Block who first brought their story to the world.

Prepare to be terrified all over again!

Robert Bloch (1917-1994) was a horror, suspense, and science fiction writer and screenwriter, best known for the novel Psycho. Altogether, he wrote over 220 stories collected in over two dozen collections, two dozen novels, screenplays for a dozen movies, and three Star Trek episodes. His many awards include the Nebula, Hugo, and World Fantasy awards (including Lifetime Achievement), and five Bram Stoker Awards. His autobiography, Once around the Bloch, was his last major work.