Things That Are: Essays (Paperback) 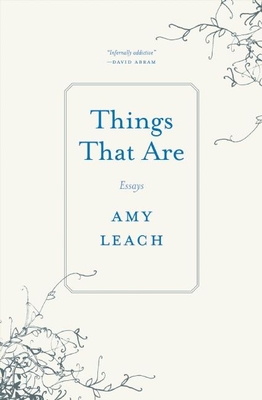 “This beautifully crafted, little book is filled with weird, funny, oddly poignant, and plainly stunning vignettes about the natural world surrounding us. Leach uses words to describe animal and plant life that you swear aren't real, only to discover, to considerable glee, their veracity. There's something about the way all of her sentences come together that feels comfortable and almost euphoric. Each essay unfolds as if from the lips of an odd, old-time storyteller sitting at the edge of the firelight - you know all these things to be true, but you've just never heard them all put so eloquently.”
— Seth Marko, UCSD Bookstore, La Jolla, CA

From the cosmic to the quotidian, this collection of essays by Amy Leach asks us to reconsider our kinship with the wild world.

The debut collection of a writer whose accolades precede her: a Whiting Award, a Rona Jaffe Award, a Best American Essays selection, and a Pushcart Prize, all received before her first book-length publication. This book represents a major break-out of an entirely new brand of nonfiction writer, in a mode like that of Ander Monson, John D'Agata, and Eula Biss, but a new sort of beast entirely its own.

Things That Are takes jellyfish, fainting goats, and imperturbable caterpillars as just a few of its many inspirations. In a series of essays that progress from the tiniest earth dwellers to the most far flung celestial bodies--considering the similarity of gods to donkeys, the inexorability of love and vines, the relations of exploding stars to exploding sea cucumbers--Amy Leach rekindles a vital communion with the wild world, dormant for far too long. Things That Are is not specifically of the animal, the human, or the phenomenal; it is a book of wonder, one the reader cannot help but leave with their perceptions both expanded and confounded in delightful ways.

Amy Leach grew up in Texas, where she graduated with a BA from Southwestern Adventist College in 2000. Since receiving her M.F.A. in nonfiction creative writing from the University of Iowa Writers' Workshop in 2005, her work has appeared in numerous literary journals and reviews, including The Iowa Review, Gettysburg Review, Orion Magazine, A Public Space, and Los Angeles Review. She has been recognized with the Whiting Writers' Award (2010), a Best American Essays honor (2009), a Rona Jaffe Foundation Award (2008), and a 2011 Pushcart Prize. Amy Leach lives in Montana.