Overheated: How Capitalism Broke the Planet--And How We Fight Back (Hardcover) 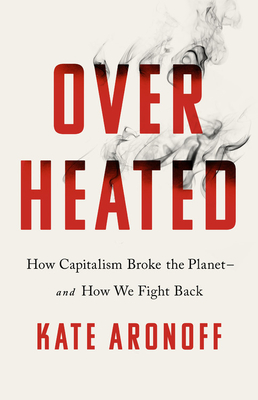 This damning account of the forces that have hijacked progress on climate change shares a bold vision of what it will take, politically and economically, to face the existential threat of global warming head-on.

It has become impossible to deny that the planet is warming, and that governments must act. But a new denialism is taking root in the halls of power, shaped by decades of neoliberal policies and centuries of anti-democratic thinking. Since the 1980s, Democrats and Republicans have each granted enormous concessions to industries hell bent on maintaining business as usual. What’s worse, policymakers have given oil and gas executives a seat at the table designing policies that should euthanize their business model.

This approach, journalist Kate Aronoff makes clear, will only drive the planet further into emergency. Drawing on years of reporting, Aronoff lays out an alternative vision, detailing how democratic majorities can curb polluters’ power; create millions of well-paid, union jobs; enact climate reparations; and transform the economy into a more leisurely and sustainable one. Our future will require a radical reimagining of politics—with the world at stake.

Kate Aronoff is a staff writer at The New Republic, a fellow at Type Media Center, and a senior fellow at Data for Progress. A frequent contributor to The Intercept, her work has appeared in the New York Times, the Nation, Dissent, Rolling Stone, the Guardian, and Harpers, among other outlets. She was previously a writing fellow at In These Times and a contributing editor at Waging Nonviolence. Aronoff is the co-editor of We Own the Future: Democratic Socialism, American Style and the co-author of A Planet to Win: Why We Need a Green New Deal. She lives in Brooklyn.

“The business model of the fossil fuel industry, she concludes in this well-documented and necessarily provocative book, is “incompatible with a livable future.”…An informative, urgent, and sure to be controversial argument.”—Kirkus Reviews

“Urgent and persuasive… [Aronoff] offers brisk yet detailed analysis of why the U.S. approach to climate change has fallen short…Policy makers and environmental activists will find much food for thought.”—Publishers Weekly

“Aronoff provides an exhaustively reported look into how capitalism and unfettered growth have destroyed the environment…Overheated covers an ambitious amount of history, but the most interesting parts delve into how we could do better in the future. I was constantly pulling out pithy facts about how we’re not implementing solutions on the necessary scale…This is very much a book for right now.”—Outside Magazine

“There are a lot of books about the climate crisis. A new one—Overheated, by Kate Aronoff, who covers climate issues for The New Republic—is not to be missed.”—Bill McKibben, The New Yorker

"Kate Aronoff is so sharp, witty and relentlessly on-target that reading her fills me with hope. Overheated is a blistering account of the many varieties of denial that have prepared the ground for climate catastrophe — and a thrilling tour of the kind of visionary politics and policies that could put the future back in our hands. Please: read this book."

—Naomi Klein, author of This Changes Everything: Capitalism vs. the Climate

“As this masterful volume makes clear, Kate Aronoff is one of the most important writers ever to take on the climate crisis. She's hard-headed in her assessment of how neoliberalism put us on the brink of civilizational collapse, but she's not hard-hearted: she offers a persuasive case for how, with lots of solidarity, we could still escape the worst of this mess. This book is careful, comprehensive, and compelling, and it should be widely read, since it offers a baseline understanding for thinking through the greatest challenge humans have ever faced.”

—Bill McKibben, author of Falter: Has the Human Game Begun to Play Itself Out?

“In this deep and vital analysis, Kate Aronoff subjects every flimsy pretext and prevarication for postponing the climate emergency to a forensic analysis. She uncovers the genealogy of ideas, and the flows of money behind them. And then, with a razor-sharp intellect, she eviscerates the climate deniers, one lie at a time. If we are to win the battle for a livable planet, we’ll only do so with the moral clarity and intelligence that Overheated has in abundance.”

—Raj Patel, author of Stuffed and Starved: The Hidden Battle for the World Food System

“The Bible observes that, ‘the heart is deceitful, who can understand it?’ The greed at the heart of climate denialism isn't new, but understanding how it has warped our imagination for what is possible is critical work for our time. I'm grateful to sister Kate Aronoff for doing this work and for making plain exactly what sort of bold action is needed if we are not only to preserve a livable planet but also revive the heart of our democracy.”

—William J. Barber, II, co-chair of the Poor People's Campaign and author of We Are Called to Be a Movement

“Climate-driven apartheid that sacrifices the many for the few, or reformed democracy that will work for the vast majority? That is the choice, explains Kate Aronoff in this bracing call to save ourselves by saving our planet from fossil fuel corporations and their enablers.”

—Nancy MacLean, author of Democracy in Chains: The Deep History of the Radical Right’s Stealth Plan for America