Answer to the Pelagian IV (Works of Saint Augustine #26) (Hardcover) 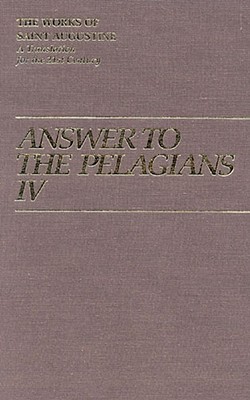 This is book number 26 in the Works of Saint Augustine series.

The four works printed in this volume reply to a series of problems which various Catholic monks of Africa and Gaul found with Augustine's doctrine of grace and predestination. They do not deal directly with Pelagianism, but are clearly related to the anti-Pelagian works of Augustine in their discussions of the doctrines on grace and predestination. The monks who raised these questions, however, posed them as difficulties they faced in accepting these doctrines, not as an overt desire to contradict Augustine and the Church, as the heretics did.

The first two works, Grace and Free Choice and Rebuke and Grace, respond to problems at Hadrumetum where a group of monks thought that Augustine's teaching on grace destroyed free choice and human merits and eliminated the possibility of anyone giving rebukes and exhortations.

The second two works, The Predestination of the Saints and The Gift of Perseverance, reply to the letters of Prosper of Aquitaine and Hilary. They reported to Augustine the objections of various persons in monastic groups in Gaul who held that the beginning of faith and the initiative for salvation came from the human will, not from God. These monks also rejected Augustine's doctrine that divine predestination and the grace of final perseverance are utterly gratuitous gifts of God.

In his responses to the monks' concerns, Augustine depends on Scripture to prove his points. He encourages his questioners to pray for understanding and to thank God for the understanding they have so far--which is surely a free gift of God, as are, he emphasizes, grace and eternal life.

Augustine of Hippo is one of the greatest thinkers and writers in the Western world. After becoming a Christian he was made bishop of Hippo in Africa, where he was influential in civil and church affairs. His more than 100 books, 200 letters, and 500 sermons have left a lasting impact on Western philosophy and culture. His classic and best-selling works include The Confessions, The Trinity, The City of God, and Teaching Christianity.