Answer to the Pelagian II (Works of Saint Augustine #24) (Hardcover) 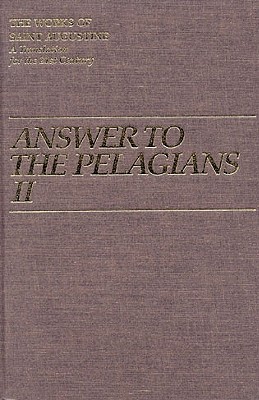 This is book number 24 in the Works of Saint Augustine series.

This volume contains three works of Saint Augustine of Hippo, all written in response to Pelagian heresies. Julian, a bishop who espoused many Pelagian teachings, wrote letters to friends, bishops, and the pope to promote his beliefs and ask for what he considered to be a fair hearing. These letters were passed on to Augustine, usually by the original recipients, in the hope that he could respond to them by expounding on the true Church teaching.

In Marriage and Desire, Augustine confirms both the goodness of marriage and the Christian belief in original sin. He outlines three goods of Christian marriage: fidelity, children, and sacrament (as a lifelong union which images that of Christ and his Church). Even though children born in a Christian marriage are born to baptized parents, they are still born with original sin, and must therefore be baptized to be saved by Jesus.

Answer to the Two Letters of the Pelagians is dedicated to Pope Boniface, who forwarded the letters in question to Augustine. Augustine addresses teachings on free will, faith and grace as gifts from God, baptism, and marital union. Julian based a number of his arguments on Scripture, especially the letters of Paul, so Augustine uses the same passages in context to show how Julian misinterpreted them.

Julian wrote several books in response to the first book of Marriage and Desire. Once Augustine received those writings in full, he replied in Answer to Julian. Augustine's statements here rely heavily on the sacred tradition of the Church. He refutes many of Julian's claims by referring to bishops in both the East and the West throughout the centuries who taught the truths that the Church and Augustine now defend.

Augustine of Hippo is one of the greatest thinkers and writers in the Western world. After becoming a Christian he was made bishop of Hippo in Africa, where he was influential in civil and church affairs. His more than 100 books, 200 letters, and 500 sermons have left a lasting impact on Western philosophy and culture. His classic and best-selling works include The Confessions, The Trinity, The City of God, and Teaching Christianity.