Seasoned in the South: Recipes from Crook's Corner and from Home (Paperback) 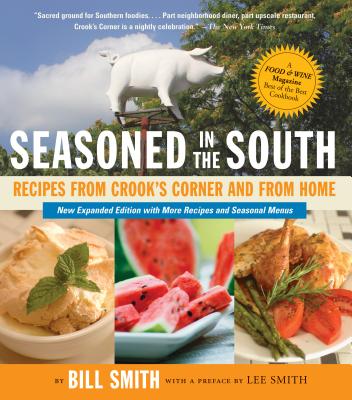 Crook’s Corner has gained national renown since it opened its doors in 1982. The New York Times called it “sacred ground for Southern foodies.” Bon Appétit called it “a legend.” Travel & Leisure described it as “ country cookin’ gone cool.” A reviewer for the Washington Post said, “the food is consistently outstanding, sort of nouvelle down home.” And Delta Sky magazine declared it “the best place to eat in Chapel Hill, in North Carolina and possibly on Earth.”

For more than a decade, Bill Smith has brought his intuitive and inspired approach to cooking to one of the South’s liveliest and most innovative kitchens. Structured around the seasons and the freshest seasonal foods, Seasoned in the South offers up Smith’s marvelously uncomplicated recipes— Tomato and Watermelon Salad, Fried Green Tomatoes with Sweet Corn and Lemon Beurre Blanc, Pork Roast with Artichoke Stuffing, and his signature dish, Honeysuckle Sorbet—the new bistro food of the South.

Bill Smith has served as chef at Crook’s Corner for more than a decade. His essays have been featured in newspapers and on radio and television, and his recipes have been selected for 150 Best American Recipes and Food & Wine Magazine’s Best of the Best.

Lee Smith began writing stories at the age of nine and selling them for a nickel apiece. Since then, she has written seventeen works of fiction, including Fair and Tender Ladies, Oral History, Guests on Earth, and most recently, Dimestore. She has received many awards, including the North Carolina Award for Literature and an Academy Award in Fiction from the American Academy of Arts and Letters; her novel The Last Girls was a New York Times bestseller as well as winner of the Southern Book Critics Circle Award.

“Makes you want to get up, right now, and cook something. . . . [One of] the 10 Best New Southern Cookbooks.” — The Charlotte Observer

“[Bill Smith] brings a sensitivity to cooking below the Mason-Dixon line. . . . Call it Southern with a French twist.” — The Denver Post