The New One: Painfully True Stories from a Reluctant Dad (CD-Audio) 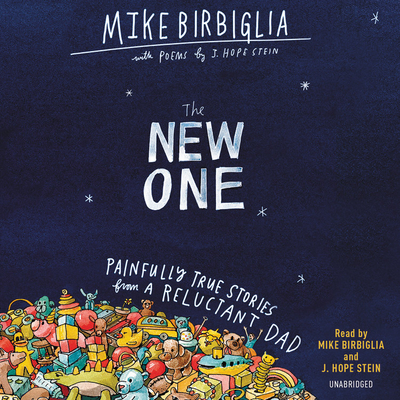 With laugh-out-loud funny parenting observations, the New York Times bestselling author and award-winning comedian delivers a book that is perfect for anyone who has ever raised a child, been a child, or refuses to stop acting like one.
In 2016 comedian Mike Birbiglia and poet Jennifer Hope Stein took their fourteen-month-old daughter Oona to the Nantucket Film Festival. When the festival director picked them up at the airport she asked Mike if he would perform at the storytelling night. She said, "The theme of the stories is jealousy."
Jen quipped, "You're jealous of Oona. You should talk about that."
And so Mike began sharing some of his darkest and funniest thoughts about the decision to have a child. Jen and Mike revealed to each other their sides of what had gone down during Jen's pregnancy and that first year with their child. Over the next couple years, these stories evolved into a Broadway show, and the more Mike performed it the more he heard how it resonated -- not just with parents but also people who resist all kinds of change.
So he pored over his journals, dug deeper, and created this book: The New One: Painfully True Stories From a Reluctant Dad. Along with hilarious and poignant stories he has never shared before, these pages are sprinkled with poetry Jen wrote as she navigated the same rocky shores of new parenthood.
So here it is. This book is an experiment -- sort of like a family.

Mike Birbiglia is a comedian, storyteller, director, actor and New York Times bestselling author who has performed in front of audiences worldwide. His shows, My Girlfriend's Boyfriend and Thank God for Jokes, were both filmed for Netflix. His most recent show, The New One, ran for ninety-nine shows at the Cort Theatre on Broadway.

As an actor, Mike has appeared on Inside Amy Schumer, HBO's Girls, and Broad City, as well as in films like Trainwreck, The Fault in Our Stars, and Popstar. He played recurring roles in Orange is the New Black and Billions. He is a frequent contributor to public radio's This American Life and The Moth Radio Hour and was honored in 2017 with the Kurt Vonnegut Award for humor.

J. Hope Stein is a poet, and the author of Little Astronaut. Her work has been published in the New York Times, the New Yorker and Poetry International.


"Mike Birbiglia & J. Hope Stein have
written the seminal parenting tome--side-splittingly funny from the first word
to the last delicious bite. It's a page-turner, wise and wise-assed, the comic
hit of the year. Whether you've been a parent or ever had one: you'll love this
knockout!"—Mary Karr, author of The Liars' Club, Cherry, and Lit

"Life is not the same after having
children. It's delusional to pretend otherwise. But Mike Birbiglia and J. Hope
Stein have not only survived, they're making their most hilarious and truthful art
yet. This book might save your best friend's life."—Lin-Manuel Miranda, Pulitzer Prize Winning writer of Hamilton


"This is a brilliant, funny, big-hearted version
of he-said, she-said. Birbiglia and Stein trade jokes and poems and splendid
storytelling about their roundabout stumble into parenthood. It's hilarious,
humane, often beautiful, and absolutely captivating."—Susan Orlean, staff writer at The New Yorker and New York Times bestselling author of The Library Book

"The
genius of this book is that Mike Birbiglia and J. Hope Stein have invented a
totally new form. He tells incredibly funny stories. She gives a gorgeous, epic
view of the same events, in poetry (she's a published poet who's been in The
New Yorker
). It's about what they went through together, not wanting to
have kids, and then having kids, through these two very different lenses.
Their diabolical writing trick: sometimes she delivers the laughs and he
delivers the feelings."—Ira Glass, host of Public Radio's This American Life

"In
a 'town where everyone is pretending to be happy and pretending to be in good
marriage and pretending to be in a nice house' it takes a poet and a comedian
to tell us the truth. What is this truth? That we are lost, but trying to find
ourselves, that we are awkward but long for grace, we are cruel but delight at
the slightest drop of tenderness. This book is hilarious because it shows us a
mirror that doesn't lie. It sings because words give delight in each simplest
moment. Imagine Groucho Marx and Jane Kenyon sit at the kitchen table and
compose a book of days. When nothing else helps, it is a sense of humor and a
beautiful song that will get us through."—Ilya Kaminsky, author of Deaf Republic and Dancing in Odessa

"I
wish I had read The New One before having a kid. Mike confronts parenthood with
the kind of devastating honesty that can't help but be funny, and Jen's poems
capture what prose can't. In a better world, this book would be sold with every
pregnancy test in America."—Bess Kalb, author of Nobody Will Tell You This But Me


"If The New One on Broadway is a raucous, tumbling tour
through the many roomed house that is Mike and Jen's journey into parenthood,
then this book is a long, cozy weekend inside the home. Mike makes you coffee
and settles in to tell his story at a wonderfully readable pace, bringing
detail and nuance impossible to contain in the stage show. Jen's poetry is the
big stunner, an outrageous treasure casually presented, emeralds strewn amongst
crumbs across the kitchen table, a string of pearls hanging on a doorknob."—Jacqueline Novak, author of How to Weep in Public

"Expanded from his one-man show of the same name (and including poetry by
his wife), comedian Birbiglia's rueful, hilarious take on new
parenthood is a treat."—People


"Sex, sympathy weight, and Birbiglia's sleep disorder
are all fair game in this hilariously, sometimes shockingly, and always
refreshingly honest look at having a kid and becoming new one's self."—Booklist

"Seasoned and rookie dads alike will appreciate Birbiglia's comic riffs
on family life. His memoir is a can't-miss gift that's sure to make 'em
laugh."—Bookpage

"Reading this raw and vulnerable book was almost like opening a page into
Mike Birbiglia's diary; his emotion is truly refreshing. He is a
wonderful comedian who will have you laughing and crying and thinking,
all in the span of a single chapter."—Bookreporter