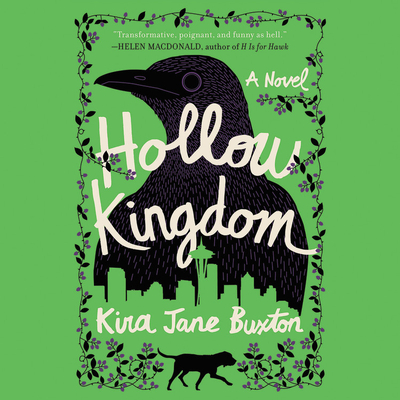 By Kira Jane Buxton, Robert Petkoff (Read by)
Email or call for price
Hard to find: allow 24 hours for information

I wasn't entirely sure what I could expect with a domesticated crow and his bloodhound best friend navigating a zombie apocalypse in Seattle, but I was in no way disappointed. Buxton's debut novel is one that sticks with its reader in a way I didn't predict, and I found myself laughing, crying, and craving Cheetos along with this bird at every turn. It is at times scary, at times hilarious, and very often poignant. I know it seems like a niche read, but give it a try anyway!

“We need more heroes like S.T. — a foul-mouthed, idealistic, moral crow with unquenchable courage — and his sidekick, a befuddled bloodhound. Kira Jane Buxton speaks crow, gull, dog, housecat, and owl with such fluency and poetry that I could not put this book down. Her vision of the zombie apocalypse is a strange and wonderful journey I want to take again and again. I really can’t think of another current novel that conveys such humor, joy, sorrow, and hope so beautifully. Thank you for restoring my faith that this world may live on.”
— Dena Kurt, River Lights Bookstore, Dubuque, IA

One pet crow fights to save humanity from an apocalypse in this uniquely hilarious debut from a genre-bending literary author.S.T., a domesticated crow, is a bird of simple pleasures: hanging out with his owner Big Jim, trading insults with Seattle's wild crows (those idiots), and enjoying the finest food humankind has to offer: Cheetos (R).Then Big Jim's eyeball falls out of his head, and S.T. starts to feel like something isn't quite right. His most tried-and-true remedies--from beak-delivered beer to the slobbering affection of Big Jim's loyal but dim-witted dog, Dennis--fail to cure Big Jim's debilitating malady. S.T. is left with no choice but to abandon his old life and venture out into a wild and frightening new world with his trusty steed Dennis, where he discovers that the neighbors are devouring each other and the local wildlife is abuzz with rumors of dangerous new predators roaming Seattle. Humanity's extinction has seemingly arrived, and the only one determined to save it is a foul-mouthed crow whose knowledge of the world around him comes from his TV-watching education.Hollow Kingdom is a humorous, big-hearted, and boundlessly beautiful romp through the apocalypse and the world that comes after, where even a cowardly crow can become a hero.