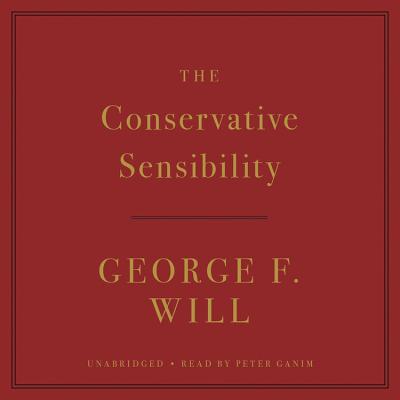 The Pulitzer Prize-winning columnist's "astonishing" and "enthralling" New York Times bestseller and Notable Book about how the Founders' belief in natural rights created a great American political tradition (Booklist) -- "easily one of the best books on American Conservatism ever written" (Jonah Goldberg).
For more than four decades, George F. Will has attempted to discern the principles of the Western political tradition and apply them to America's civic life. Today, the stakes could hardly be higher. Vital questions about the nature of man, of rights, of equality, of majority rule are bubbling just beneath the surface of daily events in America.

The Founders' vision, articulated first in the Declaration of Independence and carried out in the Constitution, gave the new republic a framework for government unique in world history. Their beliefs in natural rights, limited government, religious freedom, and in human virtue and dignity ushered in two centuries of American prosperity. Now, as Will shows, conservatism is under threat -- both from progressives and elements inside the Republican Party. America has become an administrative state, while destructive trends have overtaken family life and higher education. Semi-autonomous executive agencies wield essentially unaccountable power. Congress has failed in its duty to exercise its legislative powers. And the executive branch has slipped the Constitution's leash.

In the intellectual battle between the vision of Founding Fathers like James Madison, who advanced the notion of natural rights that pre-exist government, and the progressivism advanced by Woodrow Wilson, the Founders have been losing. It's time to reverse America's political fortunes.

Expansive, intellectually thrilling, and written with the erudite wit that has made Will beloved by millions of readers, The Conservative Sensibility is an extraordinary new book from one of America's most celebrated political writers.

George F. Will writes a twice-weekly syndicated column on politics and domestic and foreign affairs for the Washington Post. He began his column with The Post in 1974, and he received the Pulitzer Prize for Commentary in 1977. He is also a regular contributor to MSNBC and NBC News. His fourteen previous books include One Man's America, Men at Work, and Statecraft as Soulcraft. Will grew up in Champaign, Ill., attended Trinity College and Oxford University and received a PhD from Princeton.

"A thoughtful, elegant reflection on American
conservatism and the Founders' political thought."—The Atlantic

"A blockbuster -- if a book so thoughtful and learned and graceful can be called a 'blockbuster.'"—Jay Nordlinger, National Review


"When you read a work as wise, incisive and superbly written as this one, you rightly assume it was produced by a first-rate mind."—The Wall Street Journal

"A monumental achievement. The Conservative Sensibility is not a 'Washington book' about partisan politics--it's much bigger than that. It's a career capstone that will stir your soul with its passionate reminder of what conservatism really means. Buy it, read it, share it."
—Senator Ben Sasse, New York Times-bestselling author of Them and The Vanishing American Adult


"Staggeringly good. Easily one of the best books on American Conservatism ever written."—Jonah Goldberg


"The Conservative Sensibility ... is an argument about human history, epistemology, culture, religion, politics and constitutionalism, and not another vehicle for soon-dated Trump hagiography or hatred.... Its account of how the presidency has taken over the legislature in the modern era is essential to understanding the extreme danger that a figure like Trump now poses to core constitutional principle."—Andrew Sullivan, New York Times Book Review


"A wonderful book [that will] be read for a long time."—Dana Perino, Fox News


"Sums up a lifetime of thinking about politics and culture."
—The New York Times


"Excellent... [T]here is a sense of finality in The Conservative Sensibility, as though Will is offering his ultimate statement if not his last word.... Will has produced one of the best books about American conservatism ever to have been written."—Kevin D. Williamson, The Washington Examiner


"[A] strong affirmation of inalienable individual rights as set forth in the Declaration of Independence and the U.S. Constitution.... Will, a Goldwater/Reagan/Buckley Republican, has left the party. But he might argue that the party has left him, and this book can serve as a blueprint for how it might return."—John R. Coyne, Jr., Washington Times

"A remarkable summation of Will's political thought after a half-century in Washington. It's the sort of book that, when read by a young person in high school or college, might change his life."—Matt Continetti, Politico "Playbook"

"A richly documented history of and argument for a wider embrace of conservative political values."—Kirkus Reviews


"A clarion call for substantive thinking, at a time when Americans are hungry for strong leadership and a renewed debate for the soul of our country."—"Therefore, What?" Podcast

"The summa of a lifetime's worth of thinking about politics.... Will's good sense, power of reasoning, historical knowledge, and stylistic flair on full display here.... Masterful."—Commentary magazine


"[A] magnum opus..... Will still beats all his rivals in his ability to combine high thinking with a shrewd capacity to understand day-to-day American politics.... It is hard to think of any of today's angry young "movement" conservatives surviving in journalism for fifty years, as Mr. Will has, and still having enough to say to produce a big book at 78."—The Economist


"The Conservative Sensibility is George Will's definitive declaration.... Admirers of Will - I plead guilty - now have what amounts to a definitive statement, a summation of his remarkable career in journalism and politics.... A deep and sustained reflection on American conservatism.... There is nothing worse than a predictable columnist, and Will is anything but predictable. One reads him not only for his prose but also for the chance to observe a great and restless intellect.... Here, then, is George Will's task: to remind Americans of our unique heritage by connecting present debates and public figures to our nation's fundamental ideas, disagreements, problems, and statesmen..... Such is the education that awaits the reader of this beautiful, graceful, profound book."—Matthew Continetti, National Review

"[Will is] one of the most consequential thinkers in the history of the conservative movement... To say that Will wrote a brilliant book brings new meaning to understatement.... A great read.... Will's discussion of the Constitution positively sizzles... Unputdownable."—John Tammy, Forbes


"[A] magisterial assessment of contemporary life and its foundations."—Richard Vetter, Forbes

"The conservatively inclined reader, interested in the history of the United States and the politics of the present era, will find in the author's reflections much to enjoy and from which to learn....In order to reverse the direction of events, someone must formulate an alternative to it-which George Will has done in this fine book."
—The New Criterion