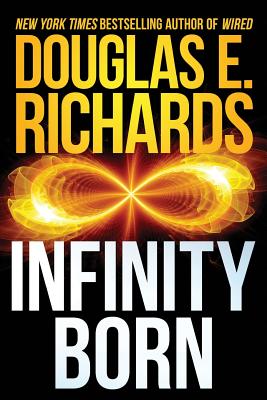 A breathtaking near-future thriller. From the New York Times bestselling author whose books have sold more than a million copies.

When DARPA's billion-dollar program to create Artificial Superintelligence is sabotaged, US operative Cameron Carr is tasked with finding the culprit. He's been on high-stakes missions before, but this time the stakes are nothing less than the future of humanity. Because the race to evolve a superintelligent computer is on, and power players around the world will stop at nothing to get there first.

In the right hands, Artificial Superintelligence could lift humanity to towering heights. But in the wrong hands, this technology could represent the greatest threat humanity has ever seen . . .

Ripped from tomorrow's headlines, Infinity Born is a roller-coaster ride of a thriller that explores the deadly perils and mind-blowing possibilities that await the human race--including both extinction and immortality.

As our phones and computers become ever smarter, Infinity Born takes an unblinking look at a technological tipping point that is just around the corner. One that will have a profound impact on the future course of human history.

"Richards is an extraordinary writer," (Dean Koontz) who can "keep you turning the pages all night long." (Douglas Preston)

OUT OF THIS WORLD
DEVIL'S SWORD.

Douglas E. Richards is the New York Times and USA Today bestselling author of WIRED and numerous other novels. A former biotech executive, Richards earned a BS in microbiology from the Ohio State University, a master's degree in genetic engineering from the University of Wisconsin (where he engineered mutant viruses now named after him), and an MBA from the University of Chicago. In recognition of his work, Richards was selected to be a "special guest" at San Diego Comic-Con International, along with such icons as Stan Lee and Ray Bradbury. His essays have been featured in National Geographic, the BBC, the Australian Broadcasting Corporation, Earth & Sky, Today's Parent, and many others. The author currently lives in San Diego, California, with his wife and two dogs. You can friend Richards on Facebook at Douglas E. Richards Author, visit his website at douglaserichards.com, and write to him at doug@san.rr.com