Gods and Heroes: Mythology Around the World (Hardcover) 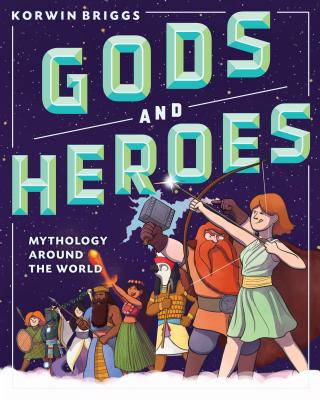 Before there was Batman, Wonder Woman, or Black Panther...there was Indra, Hindu king of gods, who battled a fearsome snake to save the world from drought. Athena, the powerful Greek goddess of wisdom who could decide the fate of battles before they even began. Okuninushi, the Japanese hero who defeated eighty brothers to become king and then traded it all for a chance at immortality.

Featuring more than 70 characters from 23 cultures around the world, this A-to-Z encyclopedia of mythology is a who's who of powerful gods and goddesses, warriors and kings, enchanted creatures and earthshaking giants whose stories have been passed down since the beginning of time—and are now given fresh life for a new generation of young readers.

Plus, You'll Learn All About:
Dragons: The Hydra, St. George's Dragon, and the Australian Rainbow Snake
Giants: Grendel, Balor of the Evuil Eye, Polyphemus, and the Purusha with the thousand heads
Monsters: Manticore, Sphinx, Minotaur, Thunderbird, and Echidne, mother of the Nemean lion that nearly killed Heracles
Underworlds: Travel to Hades, Valhalla, and the Elysian Fields

Korwin Briggs is the creator of Veritable Hokum, a webcomic about weird, funny, fascinating stories from history and mythology. He lives in New York under a pile of sketchbooks.