When the Center Held: Gerald Ford and the Rescue of the American Presidency (Hardcover) 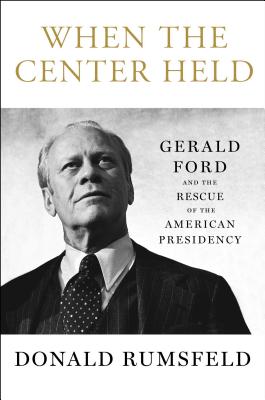 By Donald Rumsfeld
Email or call for price
Hard to find: allow 24 hours for information

A revealing political memoir of the presidency of Gerald Ford as seen through the eyes of Donald Rumsfeld—the New York Times bestselling author, and Ford’s former Secretary of Defense and Chief of Staff, and longtime personal confidant.

In the wake of Watergate, it seemed the United States was coming apart. America had experienced a decade of horrifying assassinations; the unprecedented resignation of first a vice president and then a president of the United States; intense cultural and social change; and a new mood of cynicism sweeping the country—a mood that, in some ways, lingers today.

Into that divided atmosphere stepped an unexpected, unelected, and largely unknown American—Gerald R. Ford. In contrast to every other individual who had ever occupied the Oval Office, he had never appeared on any ballot either for the presidency or the vice presidency; he had issued no policy statements nor had he ever run for national office. Now, he was being thrust into a chaotic environment in which our very future as a functioning democracy was being seriously questioned.

Gerald Ford simply and humbly performed his duty to the best of his considerable ability. By the end of his 895 days as president, he would in fact have restored balance to our country, steadied the ship of state, and led his fellow Americans out of the national trauma of Watergate. And yet, Gerald Ford remains one of the least studied and least understood individuals to have held the office of the President of the United States. In turn, his legacy also remains severely underappreciated.

In When the Center Held, Ford’s Secretary of Defense Donald Rumsfeld candidly shares his personal observations of the man himself, and provides a sweeping examination of his crucial years in office. It is a rare and fascinating look behind the closed doors of the Oval Office, including never-before-seen photos, memos, and anecdotes, from a unique insider’s perspective—essential reading for any fan of presidential history.

Donald Rumsfeld was the thirteenth and twenty-first United States Secretary of Defense. He currently chairs the Rumsfeld Foundation, which supports leadership and public service at home and the growth of free political and free economic systems abroad. He and his wife Joyce have three children, six grandchildren, and two great grandchildren.

“The presidency of Gerald R. Ford feels a world away--not simply in time, but in ethos. In this wonderful contribution to history, Donald Rumsfeld, who served President Ford as White House chief of staff and as secretary of Defense, gives a new generation an absorbing and important reflection on Ford and what the 38th president meant. The vital center in which Ford so deeply believed is facing an existential crisis in our own time, and Rumsfeld's book could not be more relevant or timely.”
— —Jon Meacham, Pulitzer Prize-winning author

“As a proud alumnus of the Ford Administration, I can attest that Don Rumsfeld’s skillful and fascinating account of those critical years has done the President justice.  This book, based on Don’s real-time memos, is essential reading to anyone seeking to understand the American presidency, as Ford and his team rescued and remade it during unprecedented turmoil.”
— &#8212Dick Cheney, former Vice President

“Gerald Ford is one of the most underrated presidents. He steadied the nation after Nixon and made peace in Vietnam. Donald Rumsfeld, who was Ford's chief of staff and secretary of defense, captures the essence of Ford and brings it home. When the Center Held is a magnificent book that should be read by every American.”
— —Jean Edward Smith, bestselling author of BUSH