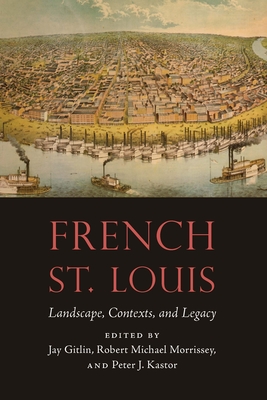 A gateway to the West and an outpost for eastern capital and culture, St. Louis straddled not only geographical and political divides but also cultural, racial, and sectional ones. At the same time, it connected a vast region as a gathering place of peoples, cultures, and goods. The essays in this collection contextualize St. Louis, exploring French-Native relations, the agency of empire in the Illinois Country, the role of women in “mapping” the French colonial world, fashion and identity, and commodities and exchange in St. Louis as part of a broader politics of consumption in colonial America. The collection also provides a comparative perspective on America’s two great Creole cities, St. Louis and New Orleans. Lastly, it looks at the Frenchness of St. Louis in the nineteenth century and the present.

“One of the most refreshing and illuminating aspects of this collection is the inclusion of women not merely as individual characters but as intrinsic parts of the history and historiography. . . . Patricia Cleary’s chapter on fashion is exemplary in portraying St. Louis’s rich economic, political, and cultural history and its connections to far-flung places. . . . Delightful and deeply insightful. Its chapters speak to one another, creating a collection that holds together surprisingly well. One could read the book from cover to cover, finding connections.”—Kathleen DuVal, Missouri Historical Review


"[French St. Louis] can foster a better understanding of our present and our future for all of us."—Missouri Life

"This volume is a commendable venture to tell the French story of the founding of interior America. The project's inception during the sestercentennial year of St. Louis's founding yielded fruitful results with the recent publication of this book. A valuable read for American historians."—Dan Shannon, Denver Posse of Westerners