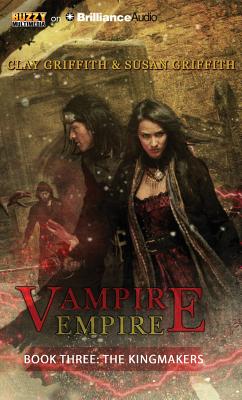 The Kingmakers is the long-awaited climactic end to the Vampire Empire trilogy.

Bogged down by winter warfare in Europe, humans are suffering crushing losses to the surprisingly well-organized vampire clans of the north. The courage and commitment of the Equatorian troops and their allies cannot hold out against the overwhelming onslaught of the enemy.

Treachery from within deals the Equatorian forces greater damage than any delivered by the vampire hordes. The only weapon left capable of smashing through enemy lines and annihilating the packs is the Empress Adele herself. Her geomantic talent and skills are formidable, but she is just one person, and the very forces she can bring to bear are also slowly draining her of her life-force.

Prince Gareth, the vampire lord of Scotland, known as The Greyfriar to the humans, both slave and free, is at a loss. His brother, Cesare, has outmaneuvered him at every turn. Brilliant, ruthless and without honor, Cesare is confident in his ability to control destiny. His goal is to become king of kings and ruler of the world. Unless the rightful heir, Gareth, can prevent him from assuming their father's throne, Cesare's unified vampire clans will destroy Equatoria's forces and set humanity, if it survives, back a hundred years.