The Rosie Project: A Novel (Paperback) 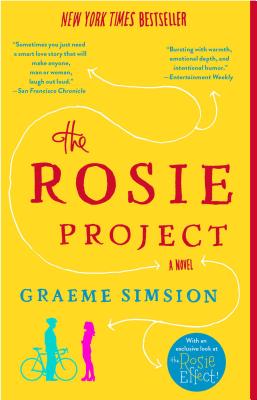 The art of love is never a science: Meet Don Tillman, a brilliant yet socially inept professor of genetics, who’s decided it’s time he found a wife. In the orderly, evidence-based manner with which Don approaches all things, he designs the Wife Project to find his perfect partner: a sixteen-page, scientifically valid survey to filter out the drinkers, the smokers, the late arrivers.

Rosie Jarman possesses all these qualities. Don easily disqualifies her as a candidate for The Wife Project (even if she is “quite intelligent for a barmaid”). But Don is intrigued by Rosie’s own quest to identify her biological father. When an unlikely relationship develops as they collaborate on The Father Project, Don is forced to confront the spontaneous whirlwind that is Rosie―and the realization that, despite your best scientific efforts, you don’t find love, it finds you.

Arrestingly endearing and entirely unconventional, Graeme Simsion’s distinctive debut “navigates the choppy waters of adult relationships, both romantic and platonic, with a fresh take (USA TODAY). “Filled with humor and plenty of heart, The Rosie Project is a delightful reminder that all of us, no matter how we’re wired, just want to fit in” (Chicago Tribune).

Graeme Simsion is the internationally bestselling author of The Rosie Project, The Rosie Effect, and The Rosie Result, featuring Professor Don Tillman, as well as The Best of Adam Sharp and, with Anne Buist, Two Steps Forward. Graeme lives in Australia.

“Sometimes you just need a smart love story that will make anyone, man or woman, laugh out loud.”
—San Francisco Chronicle

“Move over, Sheldon Cooper. There’s a new brilliant, socially inept scientist poised to win over a huge audience, and his name is Don Tillman, in The Rosie Project. . . . It’s not surprising that debut novelist Graeme Simsion has a background in science—The Rosie Project, already a success in Australia, seems almost precision engineered to keep readers turning pages. But unlike its unexpectedly lovable hero, this rom-com is bursting with warmth, emotional depth, and intentional humor.” (A–)
—Entertainment Weekly

“It’s natural to be wary of a novel that’s been the target of such gushy praise. Publishers in at least thirty-eight countries have snapped up the rights to The Rosie Project, which has been touted as a ‘publishing phenomenon,’ an ‘international sensation’ and no less than ‘the feel-good hit of 2013.’ Well, squelch your inner cynic: the hype is justified. Australian Graeme Simsion has written a genuinely funny novel. . . . This is classic rom-com.”
—The Washington Post

“Simsion’s attention to detail brings to life Don’s wonderful, weird world. Instead of using Don’s Asperger’s syndrome as a fault, or a lead-in to a tragic turn of events, Simsion creates a heartwarming story of an extraordinary man learning to live in an ordinary world, and to love. As Don would say, this book is ‘great fun.’”
—USA Today

“An utterly winning screwball comedy. . . . If you’re looking for sparkling entertainment along the lines of Where’d You Go, Bernadette and When Harry Met Sally, The Rosie Project is this season’s fix. . . . This charming, warmhearted escapade, which celebrates the havoc—and pleasure—emotions can unleash, offers amusement aplenty. Sharp dialogue, terrific pacing, physical hijinks, slapstick, a couple to root for, and more twists than a pack of Twizzlers—it’s no surprise that The Rosie Project is bound for the big screen. But read it first.”
—NPR.org

“Filled with humor and plenty of heart, The Rosie Project is a delightful reminder that all of us, no matter how we’re wired, just want to fit in.”
—Chicago Tribune

"Another great favorite: The Rosie Project, a hilarious novel by Graeme Simsion. It’s truly one of the funniest and most poignant novels I’ve read, and when you’ve finished it, there’s an excellent sequel as well."
—Nicholas Kristof, New York Times Newsletter

“The Rosie Project opens as strongly as any comic novel I’ve read in a long time. . . . The book roars at high speed to its conclusion. . . . A highfunctioning but emotionally illiterate guy like Don makes a perfect unreliable narrator. . . . Happily, Simsion doesn’t give Don an unbelievable emotional makeover. Our man just learns to live by a more complicated algorithm.”
—Milwaukee Journal-Sentinel

“One of the year’s most promising and original novelists.”
—The Wall Street Journal

“Funny, touching, and hard to put down, The Rosie Project is certain to entertain even as readers delve into deep themes. For a book about a logic-based quest for love, it has a lot of heart. . . . [an] immensely enjoyable novel.”
—Booklist (starred review)

“Read-out-loud laughter begins by page two in Simsion’s debut novel about a thirty-nine-year-old genetics professor with Asperger’s—but utterly unaware of it—looking to solve his Wife Problem. . . . What follows are his utterly clueless but more often thoroughly charming exploits in exploring his capacity for romance. . . . This novel is perfectly timed.”
—Publishers Weekly (starred review)

“[A] bright, whip-snappingly funny romantic comedy. . . . Readers, too, will push eagerly through the narrative, and at the end they’ll have one thought: thank goodness there’s a sequel.”
—Library Journal

“Don Tillman helps us believe in possibility, makes us proud to be human beings, and the bonus is this: he keeps us laughing like hell.”
—Matthew Quick, author of The Silver Linings Playbook

“The Rosie Project is the best, most honestly told love story I’ve read in a long time.”
—Kristin Hannah, author of Fly Away and Home Front

“A world so original, in a story so compelling, I defy you not to read through the night. Read this glorious novel now, in the moment, where it lives.”
—Adriana Trigiani, author of The Shoemaker’s Wife

“The Rosie Project is an upbeat, quirky, impertinent gem of a read. As the novel makes its logically irrefutable progression, readers will become enchanted by what may well be the world’s first rigorously evidence-based romantic comedy.”
—Chris Cleave, author of Little Bee and Gold

“This clever and joyful book charmed me from the first. Professor Tillman is an unlikely romantic hero but a brave, winning soul, and his quest to find a wife goes to show that rationality is no match for love.”
—Maggie Shipstead, author of Seating Arrangements

“Graeme Simsion has created an unforgettable and charming character unique in fiction. Don Tillman is on a quirky, often hilarious, always sincere quest to logically discover what is ultimately illogical—love. Written in a superbly pitch-perfect voice, The Rosie Project had me cheering for Don on every page. I’m madly in love with this book! Trust me, you will be, too.”
—Lisa Genova, author of Still Alice and Left Neglected

“With the demands of children and work, it’s rare that I find myself so caught up in a novel that I literally cannot put it down—not for food nor for conversation nor even for sleep. Charming and delightful, I was so enamored of The Rosie Project that I read it in a single, marathon sitting.”
—Ayelet Waldman, author of Red Hook Road, Bad Mother, and Love and Other Impossible Pursuits

“Although there are many laughs to be found in this marvelous novel, The Rosie Project is a serious reflection on our need for companionship and identity. Don Tillman is as awkward and confusing a narrator as he is lovable and charming.”
—John Boyne, author of The Boy in the Striped Pajamas

“Charming, funny, and heartwarming, a gem of a book.”
—Marian Keyes, author of The Brightest Star in the Sky and This Charming Man

“I couldn’t put this book down. It’s one of the most quirky and endearing romances I’ve ever read. I laughed the whole way through. And now I want to meet Don!”
—Sophie Kinsella, author of the Shopaholic series and Wedding Night

“I wanted to race through The Rosie Project but had to make myself slow down from my usual reading pace, because of the number of sly jokes that I almost missed. A lovely, original, and very funny read.”
—Jojo Moyes, author of Me Before You