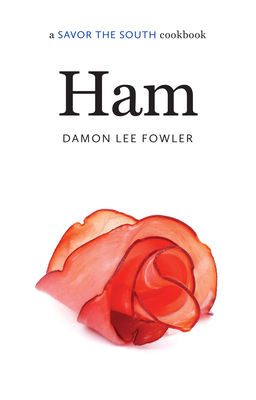 While the hindquarters of swine have been preserved in salt the world over for thousands of years, there are only a few places on earth where ham is as celebrated or integral to the cuisine as it is in the American South. To begin to understand the place that this iconic food holds in the hearts of southerners, Damon Lee Fowler writes, one has only to step into the historic smokehouse of Thomas Jefferson's Monticello and take a deep breath. More than a century after the last hams were hung to smoke in that chamber, the aroma of salt, smoke, and air-dried pork still permeates the rough masonry walls and clay floor, filling the air with its earthy perfume.

Even after centuries of culinary transformations throughout the South, that fragrance lingers in kitchens throughout the region. Ham's 55 recipes bring home the love in just about every way--brine- or dry-cured, smoked or not, boiled, baked, glazed, honey-baked and spiral cut, thin-sliced and piled into biscuits and sandwiches, fried up with eggs, with grits, with redeye gravy, added for savor to soups, casseroles, poultry, seafood, and, yes, the vegetable pot. Fowler also includes recipes inspired by Chinese, French, Italian, and Spanish dishes, and provides a guide to basic terminology and cooking methods.