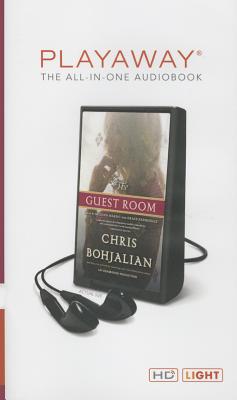 By Chris Bohjalian
$88.79
Hard to find: allow 24 hours for information

If you enjoy a book with unexpected twists and turns, Chris Bohjalian is an author you will want to read. His latest book is about the consequences of a good family man's decision to host a bachelor party for his wilder, younger brother. The story keeps us guessing but also leads us to think about important issues.
It has garnered high praise from both Charles Frazier--- "Pulses quick as a page-turner, but its concerns run deep ..." and Geraldine Brooks ---"Bohjalian’s deftness as a story teller is on full display here." I join them!

“From the explosive beginning all the way to the adrenaline rush of its conclusion, The Guest Room packs an emotional punch that will leave the reader gasping. When a bachelor party goes terribly wrong and two Russian mobsters wind up dead in his home, financier Richard Chapman finds himself struggling to save his job and marriage. Intertwined with Richard's story is the tale of Alexandra, a young sex slave with a narrative voice that will break your heart. Nobody does domestic drama quite like Bohjalian. Once again he proves himself a master of page-turning literary fiction.”
— Pamela Kinger-Horn (E), Excelsior Bay Books, Excelsior, MN

From the "New York Times "bestselling author of "Midwives "and "The Sandcastle Girls "comes the spellbinding tale of a party gone horribly wrong: two men lie dead in a suburban living room, two women are on the run from police, and a marriage is ripping apart at the seams.
When Kristin Chapman agrees to let her husband, Richard, host his brother's bachelor party, she expects a certain amount of debauchery. She brings their young daughter to Manhattan for the evening, leaving her Westchester home to the men and their hired entertainment. What she does not expect is this: bacchanalian drunkenness, her husband sharing a dangerously intimate moment in the guest room, and two women stabbing and killing their Russian bodyguards before driving off into the night.
In the aftermath, Kristin and Richard's life rapidly spirals into nightmare. The police throw them out of their home, now a crime scene, Richard's investment banking firm puts him on indefinite leave, and Kristin is unsure if she can forgive her husband for the moment he shared with a dark-haired girl in the guest room. But the dark-haired girl, Alexandra, faces a much graver danger. In one breathless, violent night, she is free, running to escape the police who will arrest her and the gangsters who will kill her in a heartbeat. A captivating, chilling story about shame and scandal, "The Guest Room" is a riveting novel from one of our greatest storytellers.

CHRIS BOHJALIAN is the author of eighteen books, including"Close Your Eyes, Hold Hands, The Sandcastle Girls, Skeletons at the Feast, The Double Bind, "and"Midwives."His novel"Midwives"was a number one"New York Times"bestseller and a selection of Oprah's Book Club. His work has been translated into more than thirty languages, and three of his novels have become movies ("Secrets of Eden, Midwives, "and"Past the Bleachers"). He lives in Vermont with his wife and daughter. Visit him at www.chrisbohjalian.com or on Facebook. "From the Hardcover edition.""